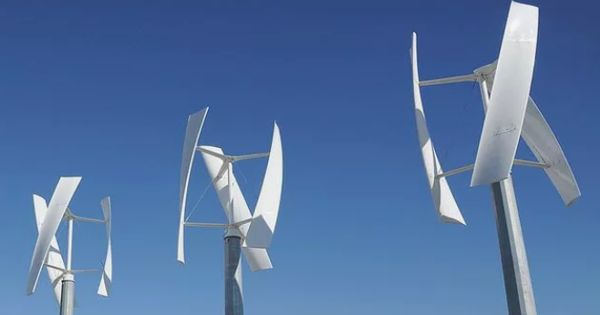 A recent discovery made by engineers at Oxford Brookes University’s School of Engineering, Computing, and Mathematics could forever alter the design of offshore wind farms. Wind turbines, according to researchers at the United Kingdom’s Oxford Brookes University, could be more efficient if they were designed differently. A group from the School of Engineering, Computing, and Mathematics has developed a new design known as “vertical turbines.”

While traditional HAWT windmills use a three-bladed “pinwheel” design to generate energy, VAWT uses a more cylindrical shape with blades rotating around a central shaft. Wind farms with more compact and efficient vertical turbines could eventually replace the now familiar sight of traditional propeller wind turbines. According to new research from Oxford Brookes University, vertical turbines are far more efficient than traditional turbines in large-scale wind farms, and when set in pairs, vertical turbines improve each other’s performance by up to 15%.

For the first time at a realistic scale, the research shows that large scale VAWTs can out-compete current HAWT wind farm turbines.

VAWTs spin on an axis parallel to the ground and exhibit the inverse behavior of the well-known propeller design (HAWTs). The study discovered that when VAWTs are arranged in grid formations, they improve each other’s performance. The positioning of wind turbines to maximize output is critical in wind farm design.

Professor Tzanakis offers his thoughts. “This study shows that vertical wind farms are the way of the future. Vertical axis wind farm turbines can be built much closer together, increasing efficiency and, ultimately, lowering electricity prices. In the long run, VAWTs can help accelerate the green transition of our energy systems, allowing for more clean and sustainable energy to be generated from renewable sources.”

According to the Global Wind Report 2021, in order to meet net zero targets and avoid the worst effects of climate change, the world needs to install wind power three times faster over the next decade.

“Modern wind farms are one of the most efficient ways to generate green energy, but they have one major flaw: as the wind approaches the front row of turbines, turbulence will be generated downstream,” said report lead author and Bachelor of Engineering graduate Joachim Toftegaard Hansen. The turbulence has a negative impact on the performance of the subsequent rows.

“In other words, the front row will convert roughly half of the kinetic energy of the wind into electricity, whereas the back row will only convert 25-30%. Each turbine costs over £2 million per MW. As an engineer, it occurred to me that there had to be a more cost-effective method.”

The study is the first to thoroughly examine many aspects of wind turbine performance, including array angle, rotation direction, turbine spacing, and a number of rotors. It is also the first study to look into whether the performance improvements apply to three VAWT turbines connected in series.

Dr. Mahak, a co-author of the article and Senior Lecturer in ECM, offers the following comments: “The value of computational methods in understanding flow physics cannot be overstated. When compared to large experimental test facilities, these types of design and enhancement studies are a fraction of the cost. This is especially important during the initial design phase and is extremely useful for industries attempting to maximize design efficiency and power output.”