Home Technology Discharge of Electricity through Gases at Low Pressure

Collisions between charged particles emitted from cathode and atoms of gas. A discharge tube is an arrangement to study the conduction of electricity through gases. An analysis of the behavior of electrons and positive ions, when present in relatively large numbers in a gas at low pressures, shows that the fields set up by their motions account for many of the fundamental phenomena of gaseous discharges. The discharge of electricity through liquefied gases is an interesting phenomenon that can be systematically studied with the help of a discharge tube. It is a closed, strong glass tube of length 50 cm and diameter 4 cm, filled with a gas. Two metal electrodes C and A are fitted inside the tube at the ends as shown in Figure. The motions of electrons in a plasma are described as a thermal agitation corresponding to temperature (T). The side tube P is connected to a high vacuum pump and a low-pressure gauge. The electrodes C and A are connected to the secondary of a powerful induction coil, which maintains a potential difference of 50,000 V. By virtue of these motions electrons can travel against a small retarding field, the magnitude of which is given by the Boltzmann Equation. The electrode C connected to the negative terminal of the induction coil is called the cathode and the electrode A connected to the positive terminal is called the anode. The potential distribution arising from currently carried by particles of one sign is discussed. When the current carriers are positive ions two cases are analyzed, i.e., the case where the ions all originate at an emitter, and the case where they are generated uniformly throughout the space. When the gas atoms in the discharge tube are at atmospheric pressure they collide with the electrons preventing them from reaching the anode. 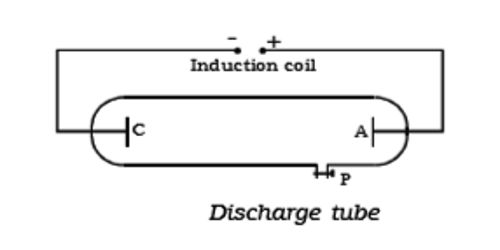 In the discharge tube collision between charged particles emitted from the cathode and atoms of the gas results in colorless glow in the tube. When the pressure of the gas inside the discharge tube is reduced by working the vacuum pump, to about 110 mm of Hg, no discharge occurs through the tube. At a pressure of about 100 mm of Hg, the discharge of electricity through the gas begins and irregular streaks of light appear, accompanied by a crackling sound. These motions cause electrons to travel outward from the center of plasma until the difference in electron concentration between the center and the edge gives rise to a potential difference of approximately a fraction of a volt, which potential difference accelerates positive ions toward the walls.

A sufficiently high voltage will break down any gas at any pressure, or for that matter any liquid or solid. As the pressure is reduced to the order of 10 mm of Hg, the irregular streaks broaden out into a luminous column extending from the anode, almost up to the cathode. It’s just easier at low pressure because the electrons torn loose from one atom or molecule get to accelerate over a longer distance (on average) before they hit the next one, and if they hit with enough energy they will knock loose additional electrons and form a cascade discharge. This column is known as the positive column. With further reduction in pressure to around 0.01 mm of Hg, the positive column disappears and Crooke’s dark space fills the whole tube. When the gas pressure is very low there are few gas atoms in the discharge tube. At this stage, the walls of the glass tube fluoresce with green color. This greenish glow in the final stage of the gaseous discharge is found to be a fluorescence of the glass produced by some invisible rays emanating from the cathode (shown in the wrapper). As such there is no hindrance to the movement of electrons and the gas conducts electricity. These rays are called cathode rays and are found to be electrons. At sufficiently low pressure (ultra-high vacuum) it gets harder again because the liberated electrons don’t hit anything before they get to the other electrode — or they have so few collisions that breakdown isn’t completed.