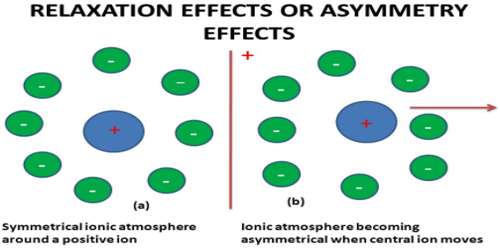 When an electrical potential is applied to an electrolytic solution, two effects produced by the ionic atmosphere prevent the ions to move at the expected speed and hence conducting the amount of current. One of these effects is Relaxation effect.

The generalized diffusion equation, in which the time‐dependent friction is taken into account, was solved numerically together with the radiation boundary condition to predict the short‐time behavior of the rate constant of an encounter reaction between a neutral target molecule at rest and migrating ions.