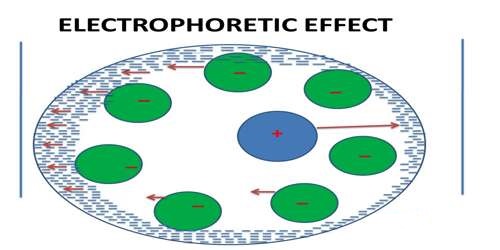 Finally, the migration of the ions is opposed by usual frictional resistance of the medium which is again dependent on the dielectric constant of the medium, the radius of the ionic atmosphere and the viscosity of the medium. The attractive forces between the solvent molecules and the ions cause the solvent molecules to be dragged along with the ionic atmosphere. The asymmetry effect is the asymmetrical or irregular distribution of the ion cloud around an ion that occurs from the finite relaxation time when a voltage is applied. It leads to a decrease in the mobility of the ions.

At infinite dilution, the asymmetry and electrophoretic effects are practically zero, and the speed of the ions and hence the molar conductivity is determined by the frictional force of the medium only. On the basis of these arguments, Debyc and Huckel were able to derive an expression to explain the variation of conductance with a concentration of the electrolyte. This can be written in the modem form as below-

Λ0m = molar conductance of the electrolyte solution at infinite dilution.

A and B = constant terms for a particular solvent at a given temperature.

Electrolysis is an oxidation reduction process