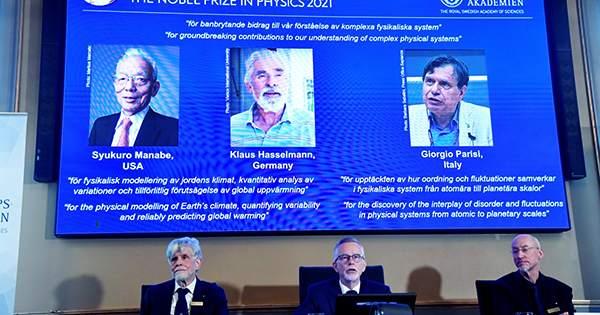 Syukuro Manabe, Klaus Hasselmann, and Giorgio Parisi have awarded the Nobel Prize in Science for inventing new ways to explain complex systems and anticipate their long-term behavior, “including the physics of Earth’s climate and how it has evolved because of human industry. Manabe and Hasselmann each receive half of the ten million Swedish krona ($1.15 million).” Manabe and his colleagues demonstrated that higher amounts of carbon dioxide in the atmosphere result in higher average temperatures over the Earth’s surface, which we are seeing every day. Hasselmann devised weather and climate-related models. The work of both experts and their teams is now at the heart of our climate models.

Giorgio Parisi gets the other half. His research focuses on complex systems, although not on the size of the Earth, but rather on disordered complex materials like spin glass. He and his colleagues uncovered hidden patterns and developed a physical and mathematical model that characterizes such a system. Its applications include understanding sand motion, neurobiology, and a variety of technology applications.

“This year’s results show that our understanding of the climate is built on a strong scientific foundation, based on a rigorous study of observations.” In a statement, Thors Hans Hansson, chair of the Nobel Committee for Physics, said, “This year’s Laureates have all contributed to our obtaining deeper knowledge into the properties and evolution of complex physical systems.”

The committee emphasized that physics is more than just the well-ordered and (now) predictable system of planets orbiting the Sun. There are systems with a level of complexity that, when first discovered, seemed to defy prediction.

Understanding and simulating complex systems is possible, thanks to the efforts of these devoted scientists and their numerous colleagues. These models are now providing us with information about how the world around us is changing. This is especially vital now, since world leaders will gather in Glasgow at the end of this month for the COP26 climate conference, where critical decisions on how to address the climate issue will made.

“It is critical that we make really firm decisions and act at a very fast speed.” We are in a situation where we could get negative or positive feedback, which could speed up the temperature rise. During the news conference, Professor Parisi of the University of Rome La Sapienza stated, “It is apparent that we must act for future generations.”

Marine Biofuels are being Studied due to Environmental Concerns