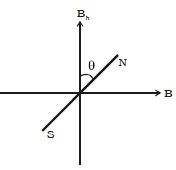 Due to these two crossed fields, the pivoted magnetic needle is deflected through an angle θ. According to tangent Law,

If a current I passes through the coil of n turns and of radius a, the magnetic induction at the centre of the coil is

where K = 2a Bh / μ0 N; is called the reduction factor of the tangent galvanometer. It is a constant at a place. Using this equation, current in the circuit can be determined.

Since the tangent galvanometer is most sensitive to a deflection of 450, the deflection has to be adjusted to be between 300 and 600.

What is Peltier Co-efficient?