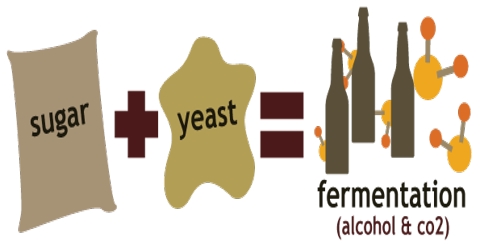 Fermentation: The process by which glucose is completely oxidized in the absence of oxygen, to form alcohol or lactic acid, and a small amount of energy is said to be fermentation. This process is followed in the field of industries, such as- bread factories, wine industries, etc. The carbohydrate gets broken down, but instead of making pyruvate, the final product is a different molecule depending on the type of fermentation. Since fermentation does not use the electron transport chain, it is not considered a type of respiration.

Anaerobic respiration occurs in some yeasts and bacteria and in a muscle when exercise is strenuous and there is not enough oxygen. The first step in is glycolysis, the second is the citric acid cycle and the third is the electron transport system. The process of glycolysis will make a net gain of 2 ATP. If there is a sufficient supply of oxygen, or sometimes other types of electron acceptors, the pyruvate then goes on to the next part of aerobic respiration.

Differences between anaerobic respiration and fermentation

Anaerobic Respiration – It refers to a type of cellular respiration that occurs in the absence of oxygen. Fermentation – It refers to any group of chemical reactions induced by microorganisms to convert sugars into carbon dioxide and ethanol.