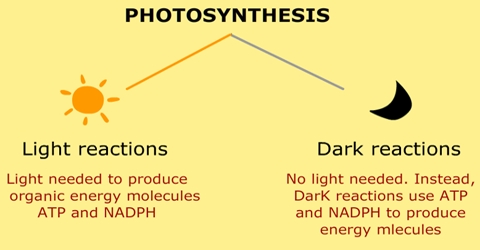 Light reactions involve the conversion of sunlight to chemical energy taking on the form of adenosine triphosphate (ATP) and nicotinamide adenine dinucleotide phosphate (NADPH). In these reactions, the energy from sunlight is absorbed by chlorophyll and converted into chemical energy in the form of electron carrier molecules like ATP and NADPH. The light-dependent reactions take place in the thylakoid membranes in the granum (stack of thylakoids), within the chloroplast. The plant uses light energy to generate the co-enzyme Nicotinamide adenine dinucleotide phosphate, or NADPH and ATP, the molecules that carry energy. The chemical bonds in these compounds store energy and are used during the dark phase.

This phenomenon is known as photo-phosphorylation. 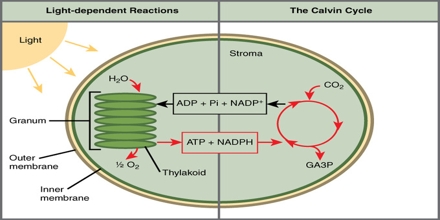 Photo-phosphorylation is of two types:

All reactions of different plants in the dark phase are not same.