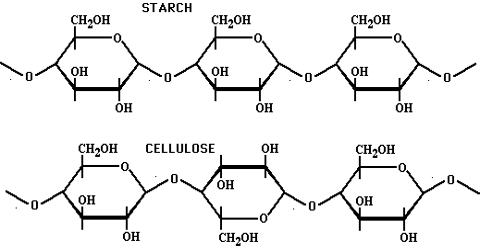 Cellulose and starch are similar polymers that have the same glucose-based repeat units and are made of same glucose, and monomer. The main difference between them is humans can eat starch but are not able to digest cellulose. The key difference is in the linkage of the glucose bonds. Cellulose has beta 1,4 linkage while starch has alpha 1,4 linkage. Cellulose occurs in nature as pure cellulose, lignin or hemicellulose. Whereas starch occurs in the form of amylopectin and amylose. Cellulose is not fit for human consumption whereas starch can be consumed by humans.

Difference between Starch and Cellulose:

Starch is one of the most common types of carbohydrates ideal for human consumption. When used for industrial purposes, starch is used for the production of whiskey, beer, and biofuel. 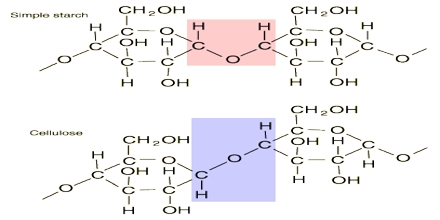 Cellulose is widely used in manufacturing paper and paperboard. In other industries, it is also used in making cotton and wood pulp.

In starch, the position of glucose repeat units is in the same direction whereas, in cellulose, each successive glucose unit is rotated 180 degrees. Some of the uses of cellulose are in the derivation of rayon, cellophane, etc. Commercially it is used as the main component in the paper industry as well as in the making of cloths such as linen and like cotton.

What is Root Pressure?