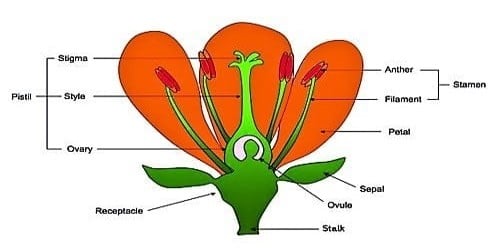 A flower has several parts. Different parts have several functions. Taking a flower in hand we can observe its different parts. Let us see what parts are there in a’datura [Dhutura] flower. Different parts of Datum flower from outside are: 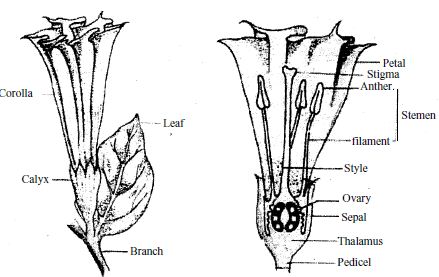 A branch with a flower        Different parts of Datura

Function: To hold other parts of the flower and to attach a sessile flower with a stem.

(b) Outside the flower, there is a green tube-like structure at the base. The top of this tube is split into five, segments. From this, it is understood that these five segments are combined together to form the tube. This outer green whorl of the flower is called the Calyx. Each of the five parts that comprise the calyx is called a sepal. Sepals may be united together (as in Datura) or maybe separated (as in Brassica). In China-rose (Jaba) outside the calyx, there is another whorl like the calyx called Epicalyx.

Function: To protect other internal parts in the bud from the adverse external environment

(c) Next to, petals combined together, to make the corolla. Usually, the corolla is the show part of the flower. Petals may be united (as in Datum). or may separate from each other [as in Brassica (Sharisha)].

Function: To attract insects and to protect the internal parts of the flower.

(d) Inside the corolla, there is five rod-like organ attached at the base. Each of these organs is called Stamen. Each stamen is divided into two parts the slender part is the filament and the swollen part at the top is the anther. Inside anther, there lie pollen grains. The total stamens of a flower collectively form a whorl, which is called the Androecium.

Function: The main function of the Androecium is to produce pollen grains.

(e) The central part of the flower is the Carpel. The swollen part at the base of the carpel is the Ovary, long slender part in the middle is the Style and lobbed part at the top is the Stigma. Inside the ovary, there are small round parts call Ovules. Ovules later develop to seeds. In the Datura flower, there are two carpels united together. The whorl of a flower that is formed by one or more carpel called the Gynoecium. The ovary of a flower develops to fruit. In china-rose five carpels are united to forms the gynoecium.

The function of flower: The main function of a flower is to produce fruits and seeds for the reproduction of the plant. Androecium and gynoecium are directly involved in seed production, thus they are called essential whorls. Calyx and corolla are called accessory whorls.