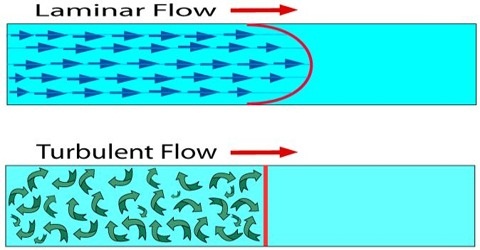 Flow of fluids can be of different types:

Flow of fluid from one place to another place is called flow of fluid. Fluid Flow is a part of fluid mechanics and deals with fluid dynamics. A fluid such as gases and liquids in motion is called as fluid flow. If a fluid is in-compressible and if there is no viscosity then it is called ideal fluid.

Fluid flow has all kinds of aspects — steady or unsteady, compressible or in-compressible, viscous or nonviscous, and rotational or irrotational, to name a few. Some of these characteristics reflect properties of the liquid itself, and others focus on how the fluid is moving.

(a) Uniform motion: If velocity always remains constant, then it is called uniform motion.

(d) Unsteady motion: If velocity all over the fluid does not remain same, then it b called unsteady motion. When the flow is unsteady, the fluid’s velocity can differ between any two points.

(f) Turbulent motion: If different lavers of a fluid do not travel parallel to each other, rather create turbulence and eddies then that motion is called turbulent motion.