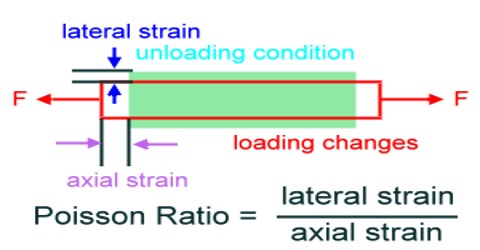 Poisson’s Ratio is the ratio of the proportional decrease in a lateral measurement to the proportional increase in length in a sample of material that is elastically stretched. This was discovered by scientist Poisson. According to his name this constant is called Poisson’s ratio.

Whenever a body is subjected to a force in a particular direction, there is change in dimensions of the body in the other two perpendicular directions. This is called lateral strain.

It is denoted by σ. It is called Poisson’s ratio. 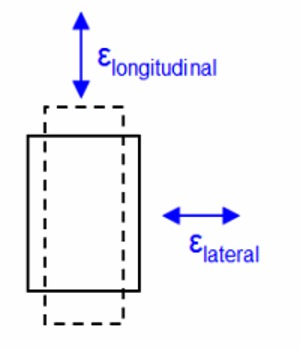 If ∆L is positive, ∆r becomes negative and vice versa.

Poisson’s ratio is the characteristic of solids only.

Unit and Dimension of σ: As σ is a ratio of two strains, so it has no unit or dimension.

Significance: Poisson’s ratio describes the relationship between strains in different directions of an object. It is a useful constant that tells us what will happen when we compress or expand materials.