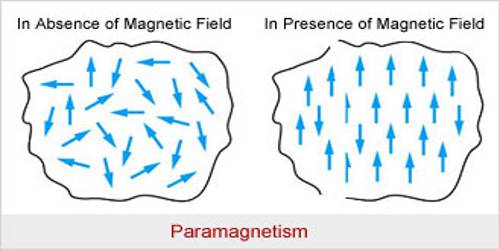 Atoms, molecules or ions in the paramagnetic materials contain permanent magnetic moments. (When one or more electrons are transferred from an atom, it is called an ion, example Na+. It means that from a sodium atom an electron has been transferred). Due to the combined effect of the orbital moment and spin moment of the electrons permanent moment of the atoms and ions is created in these materials. Unlike, diamagnetic materials the magnetic influence of their atoms or ions does not disappear. That means, combinedly they have permanent moment μ. But at ordinary temperature as the thermal vibration becomes large, so magnetic dipoles remain randomly distributed [Fig. (a)]; consequently, if magnetic field B→ is not applied, there is no net magnetization in any particular direction. When these materials are placed in a magnetic field B→, the dipoles tend to align along the field direction: on the other hand, thermal vibration resists this alignment.

In short, it can be said that the materials which acquire a small amount of magnetism towards the magnetic field when they are placed in a magnetic field are called paramagnetic material. Example – sodium, antimony, platinum, manganese, liquid oxygen, chromium etc.

Causes of the Earth’s Magnetism