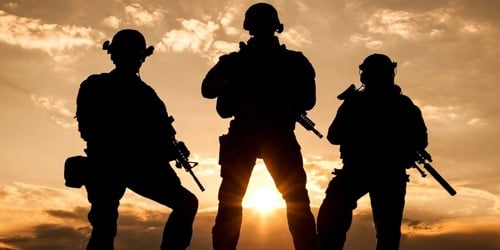 A soldier is the pride of a nation. Soldiers are entrusted with the task of guarding the honor of their country. He defends the honor of his motherland with his life and blood. An ideal soldier keeps his country’s interests above his own. His profession brings out the best in him—chivalry, discipline, team spirit, and loyalty. He is disciplined, determined and dedicated to serve his country and protect his countrymen at all times. His life is a source of inspiration to the young of the nation. His duty is of supreme importance to him.

Duty of an Ideal Soldier – The citizens of a country can live in peace as long as it has a strong army base that has soldiers who take it as their duty to:

Serve the Country Selflessly: The soldier embodies in himself the spirit of youth. Soldiers need to undergo rigorous training for years in order to become capable of battling it out in the battleground. He is courageous by temperament and his training as a soldier and experience strengthens that quality in him. One of the first things a soldier is taught is to serve his country selflessly. A good soldier is not a mere brute but a cultured man fired with the highest love for his motherland. No matter what the situation is, soldiers must think about the interest of their country before they think about that of their family or themselves. His love is so intense that he is prepared to offer his life gladly for the sake of his country. An ideal soldier does just this. He has mental courage, the bravery of his mind and also physical courage. Only someone who has the ability to put his personal interests aside and is willing to sacrifice everything for his country can be called an ideal soldier.

Protect Country’s Honor: The honor of the country and that of the national flag is of supreme importance for an ideal soldier. He has the opportunity of making the highest kind of sacrifice – that of laying down his life for his country. He can go to any extent to protect it. He is not scared to fight amid adversities to save the honor of his country and protect his countrymen. He knows that the command of his superior must be obeyed without any hesitation. He would not even hesitate to lay his life to protect the country’s honor. He is not a mere machine to obey orders, but also a man who obeys with understanding – one who knows why he has to obey. They have been truly inspiring for the soldiers to be as well as the general public.

Ensure Peaceful Environment: An ideal soldier takes it as his responsibility to ensure a safe and peaceful environment in the country. A soldier is expected and trained to be a multi-tasker and often an expert in multiple fields. Soldiers do not just guard the border and fight in the battlegrounds during wars they are there to serve the citizens in different kinds of emergency situations. They have to do all sorts of duties at different terrains. Be it a terrorist attack, flood or any other natural calamity or intense problem induced by unlawful activities, soldiers are called to handle almost every difficult situation. They are ready to face any adverse situation at any point, not time. An ideal soldier never hesitates to render help in any situation. They have a passion for their profession. He gladly serves the citizens and ensures they live peacefully.

There had been numerous instances wherein the army had been called to help in civilian matters or rescue operations. They do what they are ordered to do without questioning, without complaints, without delay. It is only because of the help rendered by them along with local authorities; the situations come under control. They always follow the chain of command. They never go over their superior’s head.

The duty of an ideal soldier is to be there for his country. The function of the army is based on discipline. He is expected to serve his country selflessly and be ready to sacrifice his life for its honor.

The Charms of City Life