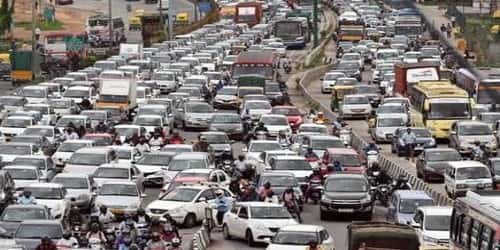 Traffic jam is a condition in which the vehicles get stuck in a jam for a certain period of time. It is the situation when vehicles are stopped completely for some time period on the roads. Traffic jams are frustrating and waste a lot of time causing unnecessary delays in reaching one’s destination. The main cause of traffic jams is the narrowness of roads in proportion to a large number of vehicles. This happens in the transport network due to the increasing vehicles and overuse of roads. Most often this problem occurs in the congested areas where the roads are very narrow

Traffic is one of the major problems in big cities and has made the lives of people really difficult. It is one of the most serious problems in big cities that people have to deal in daily life. It wastes the time of commuters and motorists. It consumes so much of time and energy unnecessarily and hence the loss of the nation. People experience delays which result in reaching late for meetings, work, schools and so on. It kills our valuable time and our work is hampered. This may even result in personal losses. It causes great suffering to the ambulance carrying dying patients and the fire brigade vehicles. It is usually not possible for the drivers to estimate the travel time. Parking here and there and overtaking tendencies are also the cause of occurring traffic jam. It takes more time to travel to the destination and results in less productive activities. It kills our valuable time. It also results in a waste of fuels that cause air pollution and the emission of greenhouse gases.

Traffic jams can also have a psychological impact on the mind of a person. It has a tremendous impact on the life of people. The delay in work performance and the sense of loss due to less productivity constantly hangs heavy on their heads. Most often traffic jam occurs at office time and also at the time when offices break. It also negatively affects work, education and personal life of people and finally to the progress of the country. These are not favored by anybody in this fast-paced world.

Therefore, serious measures have to be taken by the authorities to control traffic and promote the use of public transport. Well planned spacious roads should be constructed. Various measures need to be taken to improve the public transport network and infrastructure. The implementation of traffic safety rules by traffic police is a must. Carpooling and bike pooling should be exercised more often by people. The overtaking tendency also causes traffic jams. People should drive more sensibly and responsibly. Drivers have to be conscious of traffic rules and regulations. Sufficient traffic police should be posted on important points. New plans and schemes should be devised and implemented effectively to solve the traffic issue. Traffic rules should also be imposed with an iron hand. Hence we all can work in this way to solve the big threat of the current time.