Home Biology What is Lenticel? 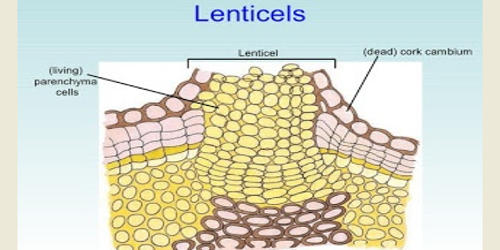 Lenticel: The lense shaped pores which are found in the bark of woody plants are said to be Lenticels. It is one of many raised pores in the stem of a woody plant that allows gas exchange between the atmosphere and the internal tissues. It is porous tissue consisting of cells with large intercellular spaces in the periderm of the secondarily thickened organs, on the stems of woody plants and roots of dicotyledonous flowering plants.

A lenticel is a spongy area present in the woody surfaces of stems. They allow for the exchange of gases between the internal tissues and the atmosphere. They are found in the woody trunk or stem of plants. They occur in almost all types of phellem containing organs including stem, root, potato tuber, etc.

(i) The lenticels are the cells that are present on the surface of the plant trunk, stem, and fruit. Lentil formation usually begins beneath the stomatal complex during primary growth preceding the development of the first periderm.

(iii) These parenchymatous cells exert pressure and as a result epidermis against it ruptures and forms lense-shaped pores.

(iv) The lenticels are the parts of the periderm that consists of numerous pores aids in gaseous exchange. The whole area thus formed is known as lenticel.

(v) The thin-walled parenchymatous cells of a lenticel are said to be complementary cells. 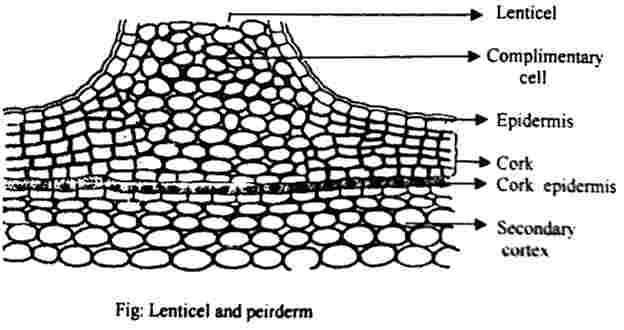 (ii) The lenticels are the parts of the periderm that consists of numerous pores aids in gaseous exchange. Gaseous exchange between air and internal tissues of a plant occurs through lenticel.

(iii) Often, transpiration on a small scale may take place through lenticel. They help in the exchange of oxygen and carbon dioxide within the environment of the plant.

(iv) It functions as a pore, providing a medium for the direct exchange of gases between the internal tissues and atmosphere.

(v) The lenticels help in the gaseous exchange between the atmosphere and the internal tissue of the stem. It also helps in transpiration called as the lenticular transpiration.

(vi) The lenticels help in allowing the oxygen into and carbon dioxide out. The lenticular transpiration occurs when the stomata close.

What is Spring Wood or Early Wood