The stem and branches of plants always expanded towards light but root and its branches expands against the light. Movement of stem towards light is called positive phototropism and movement of root against light is called negative phototropism. Phototropism is the growth of organisms in response to a light stimulus. It is most often observed in plants, but can also occur in other organisms such as fungi. The cells on the plant that are farthest from the light have a chemical called auxin that reacts when phototropism occurs. 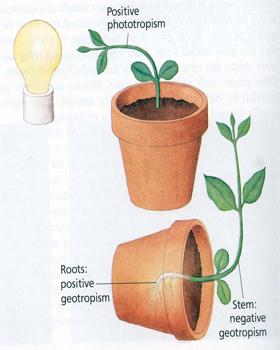 A seedling of gram or chili may demonstrate phototropism. Take a glass bottle with cork. Fill up the bottle with water. Insert the plant into the bottle through the cork so that the stem remains outside the cork and the roots remain inside being immersed in water. Place the bottle at a place where it gets light from one side. After one day it will be seen that the stem bends towards light but the tip of the root bends against light. Phototropism may also be demonstrated by putting a potted plant on a perforated wooden box. Leaves of plant manufacture food by using energy from sunlight and both plants and animals world depends on this food.

Explain Calyx and Corolla of Flower