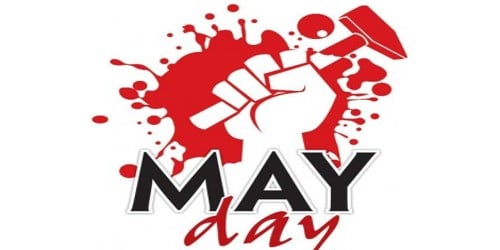 May Day – a Mournful Day

The day has an eventful historical background. The history is that during those days the working people were suffering from overwork. From the beginning of the Industrial Revolution people in factories have worked very long, shifts lasting up to fourteen or even more hours a day. It was simply inhuman. Even they had no job security too. They could not protest for fear of losing a job. However, they protested against the injustice done to them. The workers of Chicago protested against injustice and exploitation in 1886. And on May 3, 1886 police fired into a protestant crowed in Chicago, Mc Cormick Harvest Machine Company. The streets of Chicago were smeared with the warm blood of workers. As a result, at least one worker was killed and five or six others were wounded seriously. All the privilege workers enjoy today such as a minimum wage, safety laws, and eight-hours workday was the outcome of the sacrifices of the workers on May 3, 1886. These are the outcome of the struggle of these workers. These are the rights they have achieved by their struggle. Today all the workers enjoy minimum wage, safety in the workplace and the eight-hour workday. These facilities are the outcome of the sacrifice of the workers of Chicago.

Every year this day is observed with profound respect and dignity. The day is observed in most of the countries of the world. This day reminds the working class people that the workers will continue to be exploited until they stand up and speak and speak out to gain much better working conditions, better pay, and standard of life. If the workers did not stand up and demand their rights, they would continue to be exploited. The workers of different workplaces bring out a rally on this day. On this day the working classes of the world become united irrespective of castes, creeds, and nationalities. They bear placards and wear a special dress. This is the glory as well as sorrow. So black flags are flown atop the offices and black badges are worn by the workers to symbolize their heartfelt grief for their fellow workers. After the rally, some workers deliver a speech on the history and significance of the day. Thus May Day has been a symbol of unity for the workers all over the world. So, the day is of great importance for working people all around the world. We need to observe it quite carefully and properly.