Home Physics Experiment: Determination of Moment of Inertia of a Fly Wheel 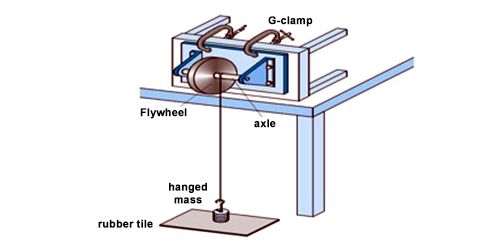 Experiment: Determination of moment of Inertia of a Fly Wheel

Theory: The flywheel consists of a weighty round disc/massive wheel fixed with a strong axle projecting on either side. The axle is mounted on ball bearings on two fixed supports. There is a little peg on the axle. One end of a cord is loosely looped around the peg and its other end carries the weight-hanger.

Suppose, the angular velocity of a wheel is ω and its radius r. Then lineal velocity of the wheel is, v = ωr. If the moment of inertia of a body is I and the wheel is rotating around an axle. 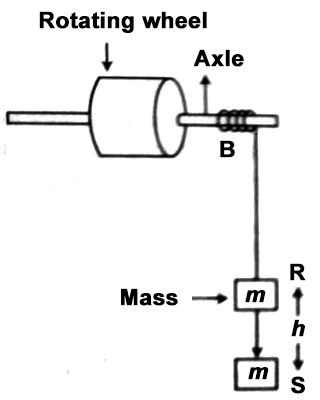 Description of the apparatus:

The flywheel was set as shown with the axle of the flywheel straight or parallel. A polystyrene tile was placed on the floor to avoid the collision of the mass on the floor.

(1) First of all, let us measure the radius of the axle by a slide caliper.

(2) Then for the determination of a number of rotation a mark by chalk is put on the axle and a rope is wound on the axle. At the other end of the rope a mass m is fastened and if it is dropped from position R, the wheel after rotating a few times, the weight with the rope will fall to position S. The wheel makes m1 number of rotation to touch the point S and time for this drop is noted from the stopwatch.

Now the rope is again wound on the axle and the mass is fastened on the other end of the rope. From position R the mass is allowed to fall to the ground and as soon as it touches the ground, the stopwatch is started. When the axle comes to rest the stop wealth is stopped. Total time and the number of rotation of the wheel before it comes to rest are noted i.e., a total number of rotation (n2) as noted.

Table 2: Determination of time and number of rotation

Calculation: If the axis takes time t for n2 number of rotation, the average angular velocity,

In the axle, a rope is to be wounded in such a way that while unwinding from the wheel it can easily drop on the ground.

Applications: The main function of a flywheel is to maintain a nearly constant angular velocity of the crankshaft.