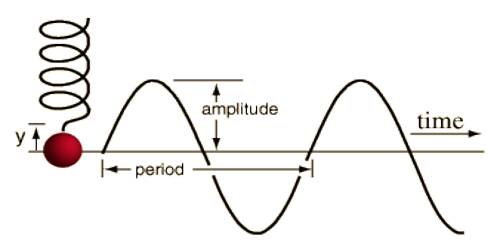 It acceleration of a body executing periodic motion acts along a fixed point in its path of motion in such a way that its magnitude from that point is proportional to its displacement, then that motion of the body is called simple harmonic motion. Motion of a simple pendulum having a small amplitude, vibration of arms of a tuning fork, vertical oscillation of a spring etc.

Here k is proportionality constant. From negative sign it is understood that acceleration is always in the opposite direction of displacement, i.e., acts towards the equilibrium position.

Again according to the Newton’s second Law of motion, considering the mass of the particle it can be shown that acceleration is proportional to displacement and is oppositely directed. In our daily life, there are innumerable examples like this, for example motion of the pendulum of a wall clock, oscillation a produced by expanding a spring and then released, all these motions are simple harmonic motion.

Any system that repeats its motion to and fro its mean or rest point  executes simple harmonic motion.