A.A. Michelson, an American physicist, spent many years of his life in measuring the velocity of light and he devised a method in the year 1926 which is considered as accurate. 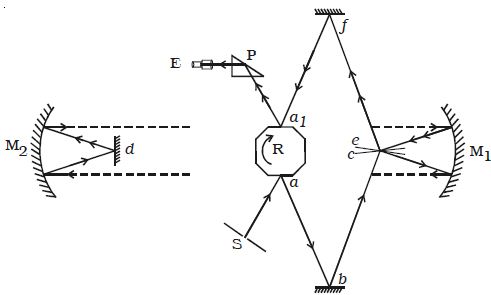 After reflections at M1 and the plane mirrors e and f. the ray falls on the opposite face a1 of the octagonal mirror. The final image which is totally reflected by a total reflecting prism P, is viewed through an eye piece E.

Let D be the distance travelled by light from face α to face al and n be the number of rotations made by R per second.

During this time interval, the distance travelled by the light = D

In general, if the number of faces in the rotating mirror is N, the velocity of light = NnD.

Describe Image in a Plane Mirror