If the overall (or stoichiometric) reaction is two molecules of A reacting to give products 2A → P with rate constant k then for some mechanisms we may have a second-order reaction. An example of such a second-order chemical reactions are that of nitrogen dioxide 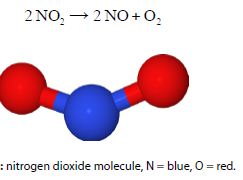 NO2 is involved in important chemical reactions in polluted atmospheres and also in the industrial manufacture of nitric acid. Using the general symbol [A] rather than the specific one [NO2] we find the rate of loss of A is expressed by the second-order kinetics equation below.

In order to obtain an equation which will give us the concentration of A at any time we need to integrate this equation from t = 0 when [A] = [A]0 to a general time t = t when [A] = [A]t. Carry out this definite integration for this second-order chemical reaction.

Using the method of “separation of variables” for the integration of the second-order kinetics equation.

(3) An easy and foolproof way of integrating the left hand side of the equation is to write it as [A]-2 and then integrate as normal. You can use this “trick’ to integrate many equations which at first sight might look a bit difficult.

What is the Strength of an Ionic Crystal Structure?