By consideration of each of the terms of the equation find approximate expressions for [B] and d[B]/dt when k1 is very much larger than k2 i.e. k1 >> k2.

Over much of the reaction the rate of change of the intermediate concentration d[B]/dt to form the product C will approximately depend on the rate of the slow “Rate Determining Step” k2. 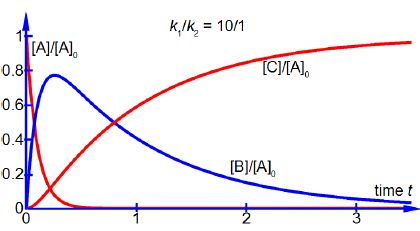 Explain 1 s Electron of the Hydrogen Atom with Integration

Rates of Chemical Reactions and Concentrations