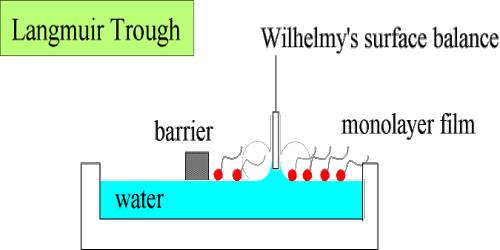 Mariners in early days used to calm sea waves by spreading oil on the ocean around their boats. It is not known whether they did it knowing the principles involved, but it appears that it was an accidental discovery. However, it is now known that the calming action of the oil was due to the formation of an insoluble layer of oil on the water followed by a considerable lowering of surface tension. Scientific investigations of films at the gas-liquid interface were probably first earned out by Miss Pockels (1891). Her findings, although not based on sound experimental observations, became the focal point of interest and the subject matter received the attention of several investigators. Some of the conclusions she reached are still retained. It was, however, the simple but masterly experiments of Larigmur (1917) that has given us an insight into the nature of surface films and their structure and has widened the horizon of human knowledge in the two-dimensional world of films. 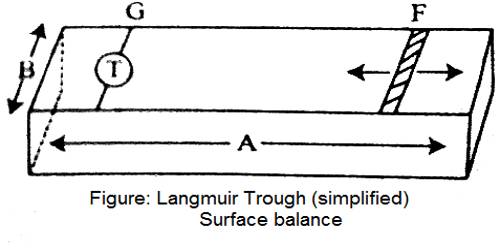 When a small quantity of a long chain fatty acid is added to be clean water surface the fatty acid spreads in a definite fashion. Due to their translational motion on the surface, they can exert pressure on the sides of the containing vessel. The following experiment developed by Langmuir illustrates the film pressure.

Clean water is contained in a trough. F is a movable barrier that can be moved right or left at will (Figure – a). G is a fixed barrier to which is coupled a torsion balance, T, so that any pressure exerted on the barrier, G, can be registered by the torsion balance. The trough has a fixed width, B, and the edge, A, is calibrated in cm and mm. Thus at any position of the movable barrier, F, a definite area is enclosed within F and G. A small quantity (0.05 to 0.1 mL of a benzene solution 0-01%) of a long chain fatty acid, say palmitic acid or stearic acid, is added gently to the clean water surface confined within the two barriers. The benzene quickly evaporates leaving behind a very small quantity of the fatty acid. The movable barrier, F, is slowly moved towards G in regular small successive steps. The pressure exerted on the barrier G is registered by the torsion balance. At each position of F, corresponding to a definite area available to the fatty acid molecules for their two-dimensional translational motion, the pressure is read off. Several readings are thus taken and when they have plotted a curve of the nature shown in Figure- b, is obtained. The pressure-area (P – A) curve is shown as ‘pqrs’. Over the region ‘pq’ the pressure increases only slightly on decreasing the area. Between ‘qr’ the change in pressure is more pronounced and between ‘rs’ the curve is almost vertical and linear. On compressing the film beyond s the film ruptures and the pressure-area curve is no longer acceptable. This has been shown by a downward arrow. The film may, therefore, be divided into three types. The molecules forming the film on the surface within ‘pq’ area are almost lying on the surface and situated quite apart from each other. 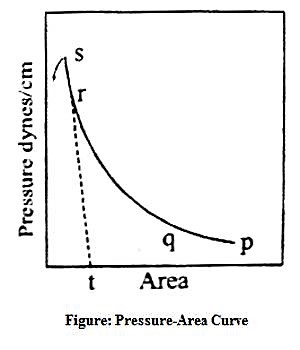 The film is said to be gaseous since they obey an equation, PA = constant, where P is the surface pressure and A is the area occupied. This equation is analogous to the ideal gas equation, PV = constant. Within the range ‘qr’, due to the decrease in the available area, the molecules are close- to each other and due to water-loving -COOH group (hydrophilic) and the water-repelling (hydrophobic) hydrocarbon tail, the molecules are pushed up and assumes a semi-orderly state. The area occupied by the molecules is no longer small compared to the total available area. The film is now said to be a liquid-expanded film. An equation of the type, P (A – Z) = constant is obeyed (compare van der Waals equation, P (V – b) = constant). When the film is sufficiently compressed the molecules are all tilted up and they are oriented in a definite fashion, the molecules touching each other. The film is said to be liquid film and the compressibility of the film is very low as shown by the portion ‘rs’. No satisfactory relation between pressure and area is known for this part of the curve. The behaviour is like a gaseous system at very high pressure. The pattern of films is diagrammatically shown in Figure- c.

The portion ‘rs’ is almost linear and gives the limiting area occupied by the molecules. If ‘rs’ is extrapolated towards the area axis cuts the area axis at ‘t’. This is the minimum area the molecules can occupy en a highly compressed and definitely oriented film. Since the mass of the fatty acid taken is known, the actual number of molecules present is easily calculated. The limiting area divided by the number of molecules gives the area occupied by a single molecule.