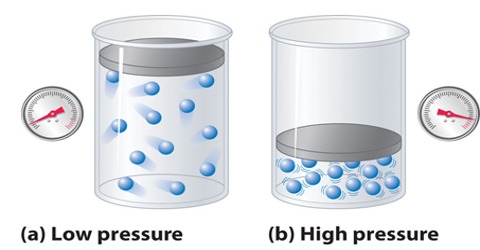 (b) the molecules do not exert any force of attraction on each other.

van der Waals introduced corrections into the ideal gas equation to account for the above assumptions.

The effect of the attractive forces is that the real pressure P of the gas molecules is less than the pressure they would exert if there were no attraction for one another. Consider a molecule in the interior of the vessel. As this is being acted upon by forces from all directions the total effect is nil. On the oilier hand, a molecule about to strike the wall has its momentum reduced by an unbalanced force trying to pull the molecules towards the interior and away from the wall. The measured pressure is thus lower by a quantity p, than the pressure the puts would exert it ii were ideal. The pressure of the gas, if it were ideal, would then be P + Pa. This is the quantity that is calculated from the kinetic theory. 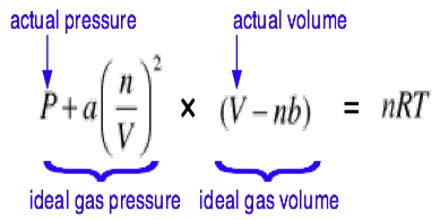 With the introduction of volume correction and pressure correction the gas equation: PV = RT. takes the form;

This is known as the Van der Waals’ Equation of state for mole of gas. For ‘n’ moles the equation becomes: