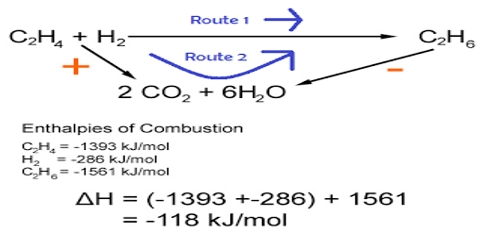 Thermal dissociation explains abnormally low molecular mass obtained for many elements and compounds. Well known examples are the dissociation of Dinitrogen tetroxide (N2O4), Ammonium chloride (NH4Cl), Phosphorus pentachloride (PCl5), Phosphorus trichloride (PC13), I2, S8, Hg2Cl2 etc. Experimental evidence of such dissociation was first obtained by L. Pebal (1862) and K. Than (1864) in the case of NH4C1. They were able to achieve a partial separation of the dissociated products, e.g., NH3 and HC1 as in the equation.

by allowing the gaseous products to diffuse through a porous plug. On one side of the plug the gas was alkaline and on the other side it was acidic. The rates of diffusion of the two gases are different as their molecular masses are widely different. This causes the presence of excess NH3 on one side and excess HCl on the other side, giving the characteristic reaction of base and acid on the two sides respectively. In thermal dissociation, equilibrium is attained in accordance with the law of mass action and may be characterized by either the equilibrium constant or the degree of dissociation, which is the ratio of the number of dissociated molecules to the total number of molecules.

The phenomenon dissociation is clearly shown in the case of N2O4. The boiling point of the liquid is 220C. Slightly above this temperature the vapour is pale reddish-brown in colour and the density of the gas corresponds to molecular formula N2O4. When the temperature is gradually increased the vapour darkens in colour until it is almost black at about 1400C, the molecular mass of the vapour is about 46, indicating almost complete dissociation into NO2 molecules:

When the temperature is raised further the colour of the vapour fades, at first slowly and then rapidly, until at 620°C it becomes almost colourless. The molecular mass of the vapour is about 30. This may be explained by dissociation of the NO2 molecules as follows:

Both NO and O2 are colourless. The dissociation is almost complete at 620°C. When the vapour is cooled the reverse reaction, i.e., association takes place. At 140°C, NO2 is formed completely and at about 22°C the vapour again corresponds to the formula N2O4.