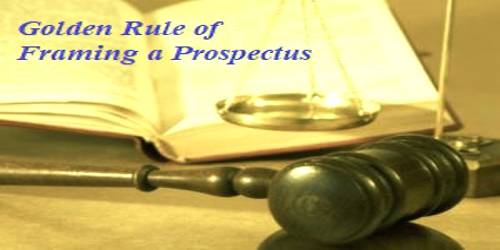 The ‘Golden Rule’ for framing of a prospectus was laid down by Justice Kindersley in New Brunswick & Canada Rly.

The Golden Rule of Prospectus has a meaning and a moral in it, which says whatever information comes from the company to the public, through the medium of a prospectus, must be true, fair and accurate. Those who issue a prospectus hold out to the public great advantages which will accrue to the persons who will take shares in the proposed undertaking.

According to the ‘Golden Rule’ the followings must be kept in mind when preparing the prospectus of a company:

The persons liable for an untrue statement in the prospectus under Sec-62 are;

(a) Director – every person who is a director of the company at the time of the issue of the prospectus;

(b) Proposed Director – every person who has authorized himself to be a director, either immediately or after an interval of time;

(c) Promoter – every person who is a promoter of the company;

(d) Authorized person – every person who has authorized the issue of the prospectus.

When and how the Memorandum can be altered?

Insurance is a Cooperative device for distributing risk – Explanation