Bill of exchange is an unconditional on paper order from one person to another to pay a particular sum of money to a selected individual. Explanation of some terms connected with bill of exchange is given below.

Drawing of a Bill: The seller (creditor) prepares the bill in the form presented above. The act of preparing the bill in its entire form with the signature is known as ‘drawing’ a bill.

Parties: There are three parties to a bill of exchange as under. 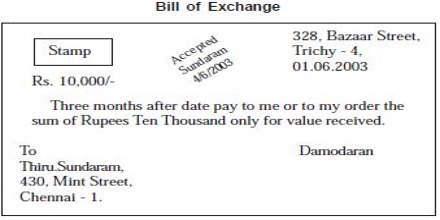 In the above format drawer and payee is Damodaran. Sundaram is the drawee.

Acceptance: In a bill drawee gives his acceptance by writing the word ‘accepted’ and also puts his signature and the date. Now the bill becomes a legal document enforceable in the court of law.

Due date and Days of grace: When a bill is drawn payable after a specified period the date on which the payment should be made is called ‘Due Date’. In the calculation of the due date three extra days are added to the specified period of the bill are known as ‘Days of Grace’. If the date of maturity falls on a holiday, the bill will be due for payment on the preceeding day.

Importance of Book-keeping in Business Information