Home Biology What is lipid?

The saturated or unsaturated compounds consisting of carbon, hydrogen and oxygen which are insoluble in water but soluble in ether, benzin chloroform etc. are known as lipids.

i. They are almost insoluble in water.

iii. It is present as an ester of fatty acid (actual or potential)

iv. It is used in the living organisms.

v. They are modified into fatty acids at the end of hydrolysis.

vi. Since the specific gravity of lipid is less than water, it floats in water.

Lipid can be of five types according to molecular structure. Such as-

Triglycerides are also known as neutral lipids because they can be hydrolyzed in the acidic and basic solutions.

Fats are saturated hydrocarbons and remain as the solid form in the normal temperature and have high melting points (700C).

Oils are unsaturated hydrocarbons and remain in liquid form at the normal temperature and have very low melting points (50C).

2. Phospholipid: The lipid which is formed by the coordination of glycerol, fatty acid and phosphate is said to be phospholipids. 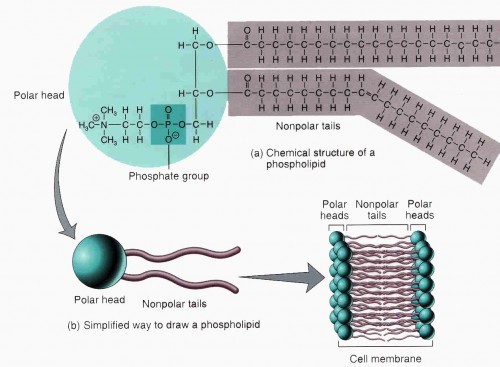 3. Glycolipid: Glycolipids do not have phosphate but they have glucose or galactose instead. Photosynthetic organs of plants possess more glucose than galactose.

4. Steroid: Numerous isoprene units are combined together to form steroids and other organic compounds. When a hydroxyl group (OH–) is present in the steroid it is called sterol. Sterol is present in all plants, except bacteria and cyanobacteria. Steroids are usually 27-29 carbon compounds.

6. Lipoproteins: Lipoproteins are composed of lipids and proteins. Here cholesterol is attached to protein as a lipid.

7. Wax: Wax is a simple lipid. Here one molecule of fatty acid remains attached to a long chain of alcohol or cholesterol. Wax is a 25-55 carbon compound. Since wax does not have any double bond, it is chemically inert.

i. Fats and oils are stored in plant bodies as reserve foods.

ii. They are received as food in oilseeds (Mustard, soybean etc.) during germination.

iii. More ATP is produced during the reduction of fats and oils.

i. Phospholipids are used as the different membrane building materials (such as- Mitochondria, chloroplast etc.) of plant cells.

ii. They regulate the permeability and conduction process of cells.

iii. They help in blood clotting.

They play an important role in the photosynthesis of plants.

i. Terpentine is used in varnish works.

ii. They are used in manufacturing tyres for vehicles.

Wax lipid creates a layer (cuticle) around the epidermis of stems leaves and resists the excessive transpiration.

Theory of Lundegard in Mineral Absorption