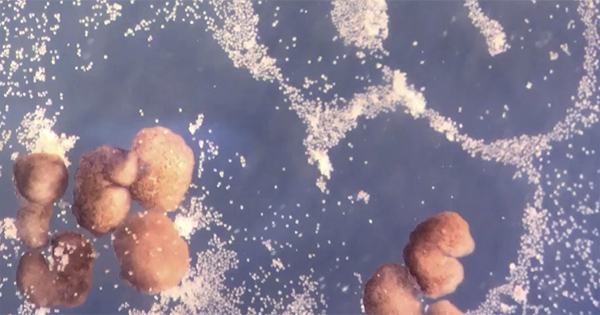 Researchers have developed robots composed of live cells that can not only perform jobs but also multiply in ways that no other living thing can. These synthetic lifeforms, dubbed Xenobots after the African clawed frog (Xenopus laevis), were originally announced in 2020. They were created from a combination of skin cells and heart muscle cells taken from frog embryos in their early stages. They are not, however, frogs, despite their genome.

A computer-designed blueprint arranged the cells in a way that allows them to perform activities like moving, pushing, or transporting items. Xenobots can reproduce given the appropriate design, according to the Proceedings of the National Academy of Science. Kinematic replication is how they accomplish it. This has previously been observed at a molecular level, but not at this magnitude. The findings demonstrate that live cells have more potential activities than we have discovered via naturalistic research.

“For a long time, people have believed that we’ve figured out all the ways that life may reproduce or duplicate. In a press statement obtained by IFLScience, coauthor Dr. Douglas Blackiston, a senior scientist at Tufts University who constructed the Xenobot “parents,” remarked, “This is something that has never been witnessed before.”

“These are frog cells multiplying in a way that isn’t like how frogs do it.” Dr. Sam Kriegman of Tuft’s Allen Center and Harvard University’s Wyss Institute for Biologically Inspired Engineering stated, “No animal or plant known to science reproduce in this way.”

After reproducing once, the replicating Xenobot’s version would shortly perish. The team went back to the AI they have been using to create these living devices and asked it to create a version that would not just die. The AI ran billions of simulations before settling on the setup that worked.

“We asked the UVM supercomputer to work out how to change the form of the initial parents, and after months of chugging away, the AI came up with some weird designs, including one that looked like Pac-Man,” Kriegman adds. “It’s counterintuitive.”

It appears to be extremely straightforward, yet it is not anything that a human engineer would think of. Why is there only one little mouth? Not make it five. Doug developed these Pac-Man-shaped parent Xenobots after we handed him the results. After that, those parents produced children, grandkids, great-grandchildren, and great-great-grandchildren.”

While some may be concerned about self-replicating biotechnology, the researchers emphasize that the Xenobots housed in a lab, readily extinguished, and have been approved by federal, state, and institutional ethical experts. The team is more worried with other societal issues, such as how our technology is not adapting quickly enough.

Dr. Joshua Bongard, co-author, adding, “We need to design technical solutions that expand at the same rate as the difficulties we confront.” Xenobots’ ability to be quick and adaptive might make them the answer to a variety of problems, ranging from microplastic collection to medicinal uses.

“Ultimately, regenerative medicine—the cure to severe damage, birth abnormalities, cancer, and aging—would be if we understood how to command collections of cells to do what we wanted them to do,” co-author Professor Michael Levin added. “We don’t know how to forecast and regulate what clusters of cells will form, which is why we have all of these difficulties.” “Xenobots are a new teaching platform.”

Take To the Skies with These Cool Drones

Stripe acquires Recko, its first acquisition in India, to add reconciliation to its payment services stack

How long can Zuckerberg afford to bankroll the AR/VR Market?