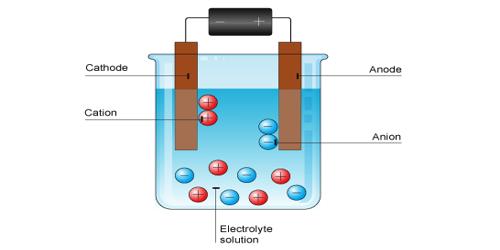 The first successful mechanism of electrolysis was put forward by R. Clausius (1857). He made the following assumptions:

(i) in solution the electrolytes are automatically split into ions,

(ii) the ions exist only for a short interval and an equilibrium exists between the ions and the undissociated molecules,

(iii) the free ions carry the charge and carry current during the short period of their existence.

(iv) only a very small number of the molecules would be split up into ions,

(v) as the ions are removed by discharge at the electrodes or recombination, fresh molecules break up into the ions in order to maintain the equilibrium.

This theory was satisfactory to a large extent, but there was no quantitative expression associated with it. The quantitative relationship was given by Arrhenius. 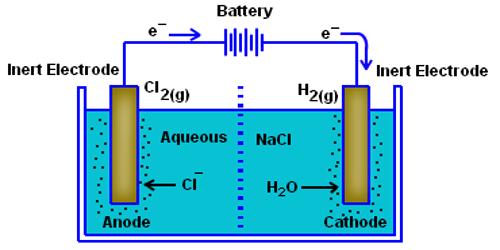 S. Arrhenius put forward his theory of electrolytic dissociation in this theory in 1887. According to this theory, it is assumed that when an acid, base of salt is dissolved in water a fraction of it breaks up spontaneously into positive and negative ions, an equilibrium is established between the undissociated electrolyte molecules and the ions. Thus for the electrolyte MA,

The ions are free to move independently and randomly in the liquid medium. When an electric field is applied the ions are attracted towards the electrodes, the positive ions, called cations, going to the cathode and the negative ions, called anions, to the anode. At the electrodes, the ions give up their charge and are liberated. By postulating that the fraction of the electrolyte dissociated increased when the solution was diluted Arrhenius was able to explain the concentration variation of conductance. Arrhenius gathered support for his theory from van’t Hoff s investigation of the colligative properties of solutions.

When you apply a voltage across electrodes immersed in an electrolytic solution (simply put, a solution with free ions), ions of the electrolyte move to those electrodes carrying the opposite charge. It is now believed that once electrolytes are placed in water the ions separate. The ions get surrounded by water molecules and oppositely charged ions which form what is called an ion atmosphere. When electricity is passed through the solution ions with their ion atmospheres move to electrodes with opposite sign.