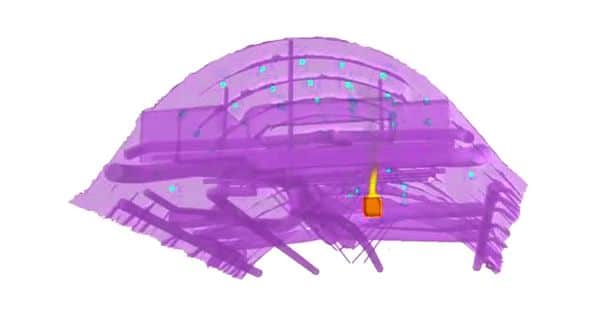 Some of the most dangerous fires are those that are not visible from a distance. This applies not only to fires in buildings, but also to those thousands of kilometers above the ground aboard commercial airliners. Many aircraft have fire detection systems, but fires that start in their attics, or overhead compartments — spaces with curved ceilings filled with air ducts, electrical wiring, and structural elements — could potentially slip through.

“Attic fires are less likely to occur than elsewhere in a plane, but they are hard to detect,” said Haiqing Guo, a contract fire research scientist at the Federal Aviation Administration (FAA). “By the time you see it, it’s too late.”

Fire detector placement in overhead compartments is especially difficult for fire protection engineers because it is impossible to predict where smoke will travel in the midst of the irregularly shaped clutter. Thanks to recent updates, a fire-simulating computer model developed at the National Institute of Standards and Technology (NIST) may now provide some much-needed guidance. A team of NIST and FAA researchers tested the tool against a real-world scenario in which fires erupted inside a grounded airliner and discovered that the software closely replicated measured temperatures and correctly identified hot spots in the attic.

The Fire Dynamics Simulator, or FDS, developed by the National Institute of Standards and Technology (NIST), simulates the flow of heat and smoke produced by fires. Since its initial release in 2000, the software has been used by engineers all over the world to design fire protection systems for buildings as well as forensic reconstructions of actual fires. In both cases, engineers use software to learn how a fire would or did burn without first performing full-scale tests, which are expensive and sometimes impractical to run.

A team of NIST and FAA researchers tested the tool against a real-world scenario, where fires burned inside a grounded airliner, and found that the software closely replicated measured temperatures and correctly identified hot spots in the attic.

In the presence of flat surfaces and block-like objects, FDS can reliably model the behavior of a fire. Because most rooms are rectangular in shape, this capability is adequate for the vast majority of scenarios. Curved surfaces, however, such as uneven terrain outside or the ceilings of trains and planes, have occasionally thrown the software for a loop.

Engineers using previous iterations of FDS would approximate curved surfaces with small boxes to work around this limitation, but a new version can do better. A recent update enables FDS to understand smoother triangle-based surfaces, bringing its simulations closer to reality in some cases.

Guo became intimately acquainted with the puzzle of detecting attic fires while researching aircraft fire safety at the FAA. He believed he had found a tool that could help crack the case after learning about FDS and its new capabilities, and he contacted NIST’s fire researchers.

The NIST and FAA collaborated to test the software by comparing simulated data to real data collected in the overhead space of a commercial airliner parked at the FAA William J. Hughes Technical Center. The team placed a gas burner in either the front or back of the space and lit a small flame to represent an attic fire in its early stages, with five firefighters on standby. They also placed 50 temperature sensors throughout the space to record how the hot smoke moved through the complex terrain of the attic.

The researchers used Light Detection and Ranging, or lidar, to create a map of the overhead compartment. Lidar is a technique that uses laser light to measure distances in three dimensions. They built a digital version of the space as a setting for the FDS simulations using the lidar data as a blueprint and hundreds of thousands of triangles as digital building blocks.

The team ran and compared the experiments and simulations, and discovered a general agreement between the two. In both scenarios, a layer of hot gas formed near the ceiling, with the same pockets of hot air forming between the metal ribs that lined the ceiling above the gas burner.

The initial temperature jumps occurred almost simultaneously between data sets. The temperature values were also comparable, with the simulated heat near the ceiling landing within 5 degrees Celsius (9 degrees Fahrenheit) of the measured values on average.

“This level of disagreement between model and experiment is typical for full-scale tests, so the model results are reasonable,” said Randall McDermott, a NIST chemical engineer and report co-author. “Ultimately, we want to be within the bounds of experimental uncertainty. As a result, a little more effort is required to identify the sources of error in this particular case.”

These findings indicate that the new FDS can capture several characteristics of a real overhead compartment fire, implying that with further development, it could become a reliable tool for fire protection engineers designing aircraft systems in the future.

The team wants to take FDS down that road, testing it against fires in variously shaped attics and seeing if the tool can replicate other aspects of fire in these spaces, such as smoke concentration, which is an important metric for fire detection. In the future, the researchers believe FDS could be useful for learning not only how to detect fires, but also how to extinguish them. Engineers could gain valuable information about how to extinguish or slow the spread of fires by modeling fire suppression systems such as fire sprinklers.

FDS could also show how potential fire suppression agents would flow and mix with smoke in irregularly shaped spaces. These virtual tests would assist researchers in identifying new chemicals or systems that are well suited for the job and providing insights into how to best implement them.