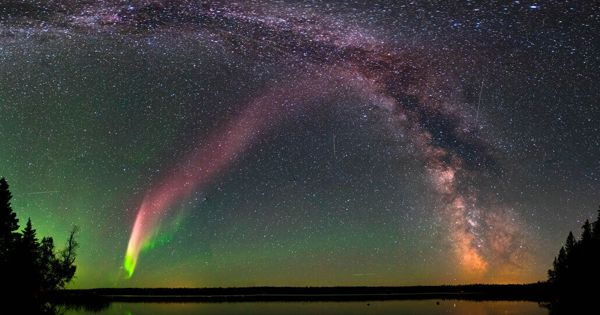 The northern and southern lights have captivated humans in the high latitudes for millennia. Despite this, it appears that the ethereal, dancing ribbons of light above Earth still hold some secrets.

A new feature of Earth’s atmospheric light show has been discovered by physicists led by the University of Iowa, according to a new study. The researchers describe multiple instances where a section of the diffuse aurora – the faint, background-like glow accompanying the more vivid light commonly associated with auroras – goes dark, as if scrubbed by a giant blotter, in video taken nearly two decades ago. The blacked-out section then reappears after a short period of time.

According to the researchers, the behavior, known as “diffuse auroral erasers,” has never been described in the scientific literature. The findings have been published in the Journal of Geophysical Research: Space Physics.

The famed northern and southern lights have been studied for millennia, but they still hold secrets. Physicists describe a new phenomenon they call ‘diffuse auroral erasers,’ in which patches of the background glow are blotted out, then suddenly intensify and reappear.

Auroras occur when charged particles from the sun, known as the solar wind, collide with Earth’s protective magnetic bubble. Some of those particles escape and fall toward Earth, where the energy released during collisions with gases in the Earth’s atmosphere produces the light associated with auroras.

“The most important thing about these erasers that we didn’t know before but now know is that they exist,” says Allison Jaynes, study co-author and assistant professor in the Department of Physics and Astronomy at Iowa. “It begs the question, are these a common occurrence that has gone unnoticed or are they rare?”

“Knowing they exist means there is a process that is creating them,” Jaynes continues, “and it may be a process that we haven’t started to look at yet because we never knew they were happening until now.”

On March 15, 2002, David Knudsen, a physicist at the University of Calgary, set up a video camera to film auroras in Churchill, Canada, a town along Hudson Bay. Knudsen’s group was disappointed because the forecast called for clear, dark skies, which are normally ideal conditions for viewing auroras, but there was no dazzling illumination. Nonetheless, the team was employing a camera specially designed to capture low-level light, similar to night-vision goggles.

Though the scientists saw mostly darkness as they looked up, the camera was picking up all kinds of auroral activity, including an unusual sequence in which areas of the diffuse aurora disappeared and then reappeared. While watching the video, Knudsen scribbled in his notebook, “pulsating ‘black out’ diffuse glow, which then fills in over several seconds.”

“What surprised me, and prompted me to jot it down, was that when a patch was brightened and turned off, the background diffuse aurora was erased. It vanished “Knudsen, a co-author on the study and a native of Fort Dodge, Iowa, has studied aurora for more than 35 years. “The diffuse aurora had a hole in it. After about a half-minute, the hole would fill back in. I’d never seen anything like it before.”

The note sat dormant, and the video went unstudied until Iowa’s Jaynes gave it to graduate student Riley Troyer to look into. Jaynes discovered Knudsen’s recording at a scientific meeting in 2010 and used it in her doctoral thesis on diffuse aurora a few years later. She wanted to learn more about the phenomenon now that she was on the faculty at Iowa.

“I had a feeling there was something there. I knew it was distinct and one-of-a-kind “Jaynes, an assistant professor in the Department of Physics and Astronomy, explains. “I had some ideas for how to analyze it, but I hadn’t done so yet. I gave it to Riley, and he took it much further by devising his own method of analyzing the data and drawing some important conclusions.”

Troyer, from Fairbanks, Alaska, took up the assignment with gusto. “I’ve seen hundreds of auroras growing up,” says Troyer, who is in his third year of doctoral studies at Iowa. “They’re part of my heritage, something I can study while keeping ties to where I’m from.”

Troyer developed a software program that identified frames in the video where the faint erasers could be seen. During the two-hour recording, he recorded 22 eraser events in total. “The most valuable thing we discovered is showing the time it takes for the aurora to go from an eraser event (when the diffuse aurora is blotted out) to being filled or colored again, and how long it takes to go from that erased state back to being diffuse aurora,” says Troyer, the paper’s corresponding author. Having a value for that will aid in future magnetic field modeling.”

Jaynes compares learning about diffuse auroral erasers to studying DNA in order to comprehend the entire human body. “Particles that fall into our atmosphere from space can have an impact on our atmospheric layers and our climate,” Jaynes explains. “While particles with diffuse aurora may not be the primary cause, they are smaller building blocks that can help us understand the aurora system as a whole, as well as how auroras occur on other planets in our solar system.”

Researchers describe Cosmic Dust Demystified and how it impacts Earth

It’s May 4, So Grab Your Telescope. “Baby Yoda” Is The Nebula You Are Looking For