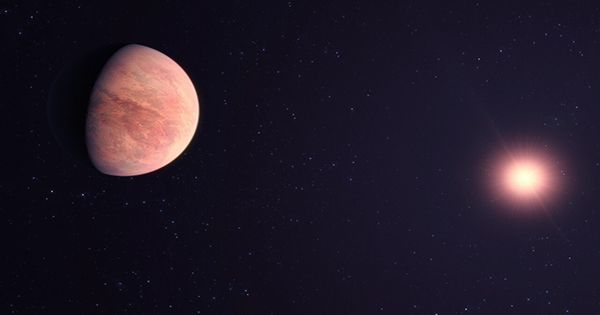 It is quite rare to be able to see a planet outside of our Solar System up close. Almost all of them have been discovered via sensing the planet’s influence on its star rather than seeing the planet’s light. Nonetheless, a brown dwarf aside, the planet 2M0437b has been photographed for three years and is likely the youngest planet ever discovered. Its discovery may open the path for even more intriguing discoveries in the future. Planets, according to school science lessons, do not emit their own light. This makes them extremely difficult to spot when orbiting other stars because they are not only inherently weak but any light they do reflect is lost in the glare of their parent star.

Very young planets, on the other hand, may glow red and be even brighter in the infrared region of the spectrum because they are still very hot. 2M0437b is one of the lightest and possibly youngest examples we know, according to an article in Monthly Notices of the Royal Astronomical Society (preprint on ArXiv.org). In addition to retaining the majority of its creation heat, 2M0437b has currently located roughly 100 AU (15 billion kilometers (9.32 billion miles) from its parent star 2MO437, or 100 times the Earth-Sun distance.

2M0437b receives almost no light from 2M0437 at such a distance. That will make detection far more difficult in a few million years – even individuals on another planet in the same star system may struggle to see something so faint. For the time being, though, it maintains the planet’s glow separate from the star’s light, allowing them to identify. It also helps that 2M0437 is 15-18% of the mass of the Sun, making it hundreds of times fainter, whereas 2M0437b predicted to be 3-5 times Jupiter’s mass. The images would be impossible to create if they were physically closer together or in bulk.

In 2018, the Subaru Telescope on Maunakea discovered 2M0437b for the first time. Given the distance between the star and the planet, the discoverers needed to be sure they genuinely connected, rather than being light years apart but moving in the same direction.

One of the important components of the research is confirmation that 2M0437b is definitely travelling across the sky with its parental star as the two circles the galaxy together, as well as some information about the two. Both are located in the Taurus Cloud, a stellar nursery 430 light-years away that is forming new stars and planets. “To achieve this finding, we needed two of the world’s largest telescopes, adaptive optics technology, and Maunakea’s bright sky,” said co-author Dr. Michael Liu of the University of Hawaii in a release.

The planet’s estimated age of 2.5 million years is close to the Hawaiian Islands from which it was discovered, and its temperature of 1,100-1,200 oC (2,012-2,192 oF) fits the lava spewed by Klauea Volcano, according to the authors. Nonetheless, future information of 2M0437b is likely to come from space rather than Hawaii.

When the JWST debuts later this year (hopefully), there will be a near-endless demand for its time, but observing newly created planets, which light brightest in the near-infrared, is a mission to which it is ideally suited. According to the main author Professor Eric Gaidos of the University of Hawaii, the JWST “might detect chemicals in its atmosphere and indicate whether the planet has a moon-forming disk.” Such data could explain how a small, young star with such a huge planet could exist in defiance of prevailing models.