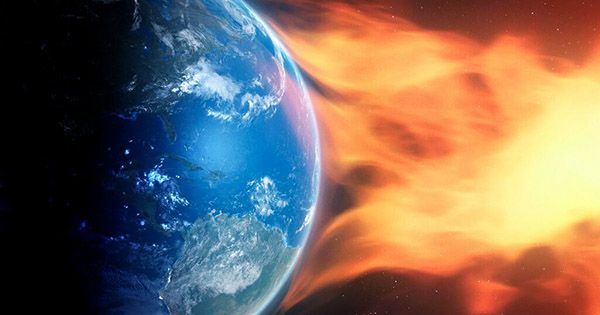 You may notice flickering lights, strange noises on the radio, or your GPS may be malfunctioning on these spookiest of weekends. It will not be due to otherworldly machinations, but rather to a huge eruption on the Sun, which signals the arrival of a solar storm.

Our star emitted an X-1 class flare on October 28, the most powerful on the scale, and it aimed directly at Earth. This resulted in a minor solar storm at higher latitudes and a powerful radio event that smashed into our planet just off the coast of South America. It was, however, accompanied by a coronal mass ejection (CME) that would bombard Earth with energetic particles over the following few days, perhaps causing some disturbances. Solar flares are intense radiation blasts. They cannot physically hurt humans on the ground since they cannot pass through the atmosphere, but they can disrupt the atmosphere where GPS and communication signals flow.

According to NOAA’s Space Weather Prediction Center, the brunt of it will hit on October 30 (with effects spreading into October 31), with a G3 geomagnetic storm (a mid-level classification comparable to a powerful geomagnetic storm) forecast. This implies it might cause problems with Earth’s electrical systems, causing voltage fluctuations that would necessitate voltage adjustments and perhaps triggering safety device alarms. On the good side, the auroras should be stunning.

The wave of particles in orbit will have a variety of effects on satellites. Because the storm will influence the highest and most tenuous layers of our planet’s atmosphere, spacecraft in low-Earth orbit will experience increased drag. The wave can also electrically charge satellites’ surfaces, causing them to lose their orientation.

This might also make telecommunications more difficult, as well as the numerous important daily activities that rely on the Earth’s worldwide network of satellites. For the fleet of global navigation satellite systems that power our phones’ maps, for example, this might result in signal loss and mistakes in determining where you are. The storm also expected to disrupt high-frequency communications.

Every geomagnetic storm has an unseen benefit, and the aurorae, the beautiful northern and southern lights, are one of them. We should be in for a treat, and those in the mid-latitudes may even be able to see them (weather allowing). Northern lights might be visible as far north as 50 degrees magnetic latitude, or as far south as Pennsylvania in the United States. The aurora prediction predicts an uptick in activity starting tonight, and NOAA expects a lesser geomagnetic storm to last until October 31. Solar Cycle 25 is already proving to be highly active, with this X-class flare and the last one that reached Earth in July, yet it will not achieve peak activity until 2025.

A Petition to Keep Jeff Bezos from Returning to Earth has Reached 100,000 Signatures