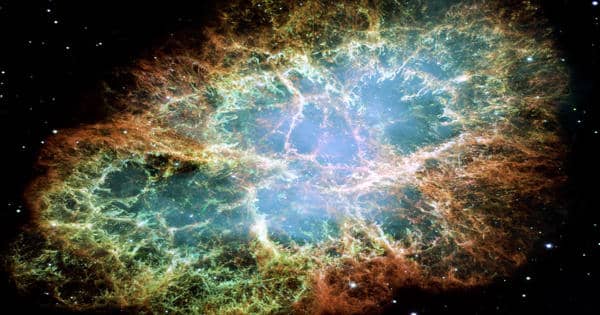 The discovery that the nebulae surrounding the most powerful pulsars emit ultra-high-energy gamma rays may rewrite the history of the rays’ galactic origins. Pulsars are rapidly rotating, highly magnetized collapsed stars that are surrounded by nebulae that are powered by winds generated within the pulsars.

“We took advantage of the wide field-of-view and survey capabilities at the High Altitude Water Cherenkov Observatory (HAWC) to search around a collection of powerful pulsars. We found significant evidence that ultra-high-energy gamma-ray emission is a universal feature found near these objects,” said Kelly Malone, an astrophysicist in the Nuclear and Particle Physics and Applications group at Los Alamos National Laboratory and lead author of the HAWC Collaboration’s new study of gamma radiation from pulsars.

The HAWC Collaboration comprises more than 100 international researchers. Malone developed the gamma-ray energy estimation algorithm that is used in the paper and led the entire analysis.

We found significant evidence that ultra-high-energy gamma-ray emission is a universal feature found near these objects,” said Kelly Malone, an astrophysicist in Nuclear and Particle Physics.

Conventional wisdom had attributed ultra-high-energy (more than 56 teraelectronvolts) gamma-ray emissions to PeVatrons, sources of neutrinos, and gamma rays associated with this acceleration of charged cosmic rays to petaelectronvolt energies. The energies produced are approximately five times greater than those produced by accelerators on Earth. This was called into question when the HAWC Collaboration published a catalog of nine gamma-ray sources emitting above 56 teraelectronvolts in 2020. That is the most energetic catalog of astrophysical sources ever created. The team was taken aback when they discovered that all of the detected sources were close to the most powerful pulsars ever observed.

The team looked for ultra-high-energy gamma-ray signals near extremely powerful pulsars in their new paper.

“We discover that ultra-high-energy emission appears to be a universal property of these objects. The gamma rays are most likely produced by pulsar wind interactions. This enables us to build a more complete picture of how the most energetic gamma rays ever detected are produced in our galaxy “Malone stated. “Now that we know that pulsar wind nebulae emit at these energies, we can concentrate our efforts on detecting more of them with longer searches and more sensitive experiments.”

Pulsar wind nebulae are composed of magnetized clouds of positrons and electrons that have been accelerated to extremely high energies by the action of a central pulsar, which is frequently embedded within a host supernova remnant. They are the Galaxy’s largest population of firmly identified TeV gamma-ray sources and are thought to be contributors to the leptonic Galactic cosmic-ray spectrum, making them viable source candidates in the quest to understand the origin of the cosmic-ray positron fraction excess. Their very-high-energy gamma-ray emission is of particular interest for spectral models because their dominant radiation process is inverse Compton scattering on target photons present in interstellar radiation fields such as visible, near, and far-infrared ambient photons as well as the Cosmic Microwave Background.

The HAWC Collaboration recently built a detector upgrade that is more sensitive to high-energy gamma rays. Furthermore, the planned Southern Wide-field Gamma-ray Observatory (SWGO) experiment will be extremely sensitive above 50 teraelectronvolts and will be capable of performing detailed studies of pulsar emissions.

The HAWC Observatory is made up of a series of water-filled tanks located high on the flanks of the Sierra Negra volcano in Puebla, Mexico, where the thin atmosphere allows for better gamma-ray observations. When gamma rays collide with molecules in the atmosphere, showers of energetic particles form. When particles in cosmic ray showers collide with the water inside the HAWC detector tanks, they produce light flashes known as Cherenkov radiation. Researchers use Cherenkov flashes to reconstruct the sources of particle showers in order to learn more about the particles that caused them.

The paper, “Evidence that Ultra-high-energy Gamma Rays Are a Universal Feature near Powerful Pulsars,” is published in The Astrophysical Journal Letters.