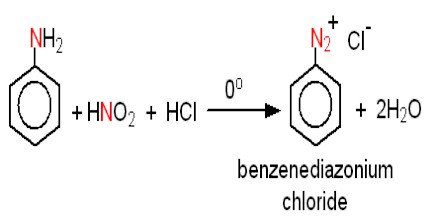 The salt having two N atom-containing cation  (-N≡N↔N≡N:) in the positive part of benzene ring & inorganic mono-valet anions (Cl, Br, NO3, HSO4, BF4, etc.) in the negative part is known as Diazonium salt. A diazonium salt is an organic compound that contains a nitrogen-nitrogen triple bond and some other generic side group that could be either alkyl or aryl. These salts are a group of organic compounds that shares one general functional group R-N + 2X. In R-N + 2X, R is an organic group. For example, alkyl or aryl group. And X is organic or inorganic anions. The process by which primary amine reacts with HNO2 (in presence of mineral acid) at low temperature (0-5 C) to form diazonium salt is called diazotization. For example- Halogen, Chlorine, Bromine, etc.

We use diazonium salts in the dye and pigment industries. They play a major role to produce dyed fabrics. 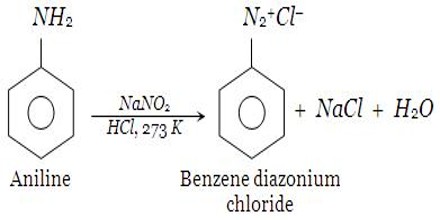 The addition of the solution of NaNO2 is stopped when one drop of the resulting solution starch iodide paper blue. Nitrous acid is a highly toxic gas. Therefore, it is generally prepared during the reaction itself by reacting NaNO2 with a mineral acid. A pale yellow colored solution of benzene diazonium chloride is formed.

Method of preparation: The reaction of aniline (aromatic amine) with nitrous acid results in the formation of the diazonium salt. At first, around bottom flask with HCI is taken and aniline is solved into it. Then an aqueous solution of sodium nitrite is added to the flask when benzene diazonium chloride is formed. Nitrous acid is a highly toxic gas and hence it is generally prepared during the reaction itself by reacting NaNO2 with a mineral acid. It is, therefore, important to keep the reaction conditions below 50C or else the diazonium group will decompose to give N2 as soon as it is formed.

Preparation of Chloroform from Acetone