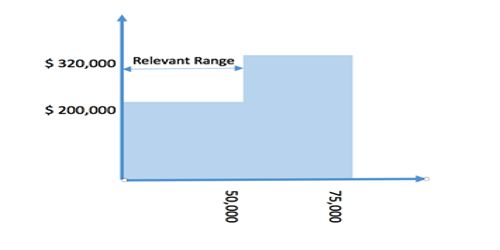 The relevant range refers to a particular activity level that is enclosed by a minimum and maximum amount. Within the designated boundaries, certain revenue or cost levels can be expected to occur. In accounting, relevant range refers to a limited span of volume or activity. Outside of that relevant range, revenues and expenses will likely differ from the expected amount For example; ABC Company constructs a budget within a relevant revenue range of no more than $20 million. If actual sales were to exceed that amount, then ABC would need to construct a new manufacturing facility. As another example, ABC Company constructs a manufacturing facility, which has a fixed cost of $10 million to operate and maintain every year. However, if production levels exceed 3 million units per year, then this fixed cost will increase, because of additional wear and tear on the facility. Thus, the relevant range of this fixed cost is up to a maximum of 3 million units per year. Fixed costs can create difficulties if it becomes necessary to express the costs on a per unit basis. Variable cost is constant if expressed on a per unit basis. Direct material, direct labor, and variable overhead are all variable costs. In both of the above examples, we can see that only the fixed cost needed to change and that remain fixed up to a given range. But no pertain to the variable costs. Variable cost increases with the increase in the level of production by not maintaining any given range. So we can say with the given statement that relevant range pertains to fixed costs, not variable costs.

What are the Benefits that Result from Decentralization?

Distinguish between Budgets and Budgetary Control