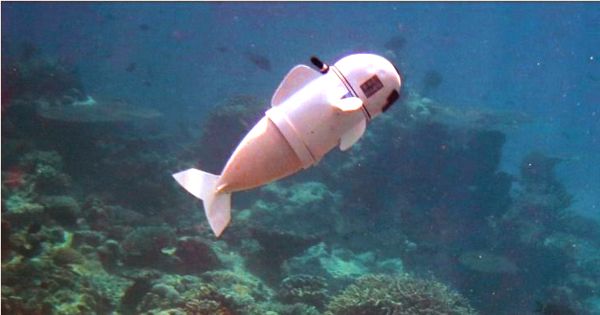 Researchers have invented a swarm of tiny fish-inspired robots that can synchronize their motions on their own, without any human feedback. Autonomous robots basically emulate the actions of a school of fish in nature, showing a realistic, dynamic, three-dimensional group behavior. This form of decentralized, autonomous self-organization and coordination has long intrigued scientists, especially in the field of robotics.

Each robot (called ‘Bluebot’) is equipped with cameras and sensors that allow it to track its neighbors and gain a sense of direction. This is a step above the traditional multi-robot communication scheme in which individual bots would communicate with each other through radio and relay their GPS data on a continuous basis.

Researchers have developed fish-inspired robots that can synchronize their movements like a real school of fish, without any external control. They demonstrated complex 3D collective behaviors with implicit coordination in underwater robots.

Now, a team of researchers at the Harvard John A. Paulson School of Engineering and Applied Sciences (SEAS) and the Wyss Institute for Biologically Inspired Engineering have developed fish-inspired robots that can synchronize their movements like a real fish school without any external control. For the first time, researchers have shown complex 3D collective behaviors of tacit communication in underwater robotics.

“Robots are often deployed in areas that are inaccessible or dangerous to humans, areas where human intervention might not even be possible,” said Florian Berlinger, a Ph.D. Candidate at SEAS and Wyss and first author of the paper. “In these situations, it really benefits you to have a highly autonomous robot swarm that is self-sufficient. By using implicit rules and 3D visual perception, we were able to create a system that has a high degree of autonomy and flexibility underwater where things like GPS and WiFi are not accessible.” 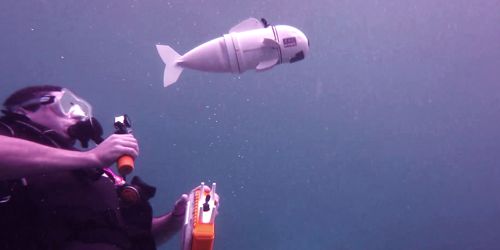 During the test, a swarm of Bluebots was inserted into a water tank with a light source and no other external input from the researchers. When one of the bots was the first to detect the light, his movements signaled the others to gather around. The robots may also work in a search-and-rescue mission, the researchers said.

To address these obstacles, researchers have built a vision-based coordination device based on blue LED lights in their fish robots. Each robot underwater, named the Bluebot, is fitted with two cameras and three LED lights. On-board fish-lens cameras track the LEDs of the surrounding Bluebots and use custom algorithms to calculate their altitude, position, and direction. Based on the simple development and identification of LED light, the researchers have shown that Blueswarm can exhibit complex self-organized behaviors, including aggregation, dispersion, and circle forming.

Berlinger hopes to improve the design in the future so that the robot fish does not need LEDs to monitor the path of the swarm. They could be used outside the lab for restoration initiatives, such as coral reefs. At the end of the day, this extraordinary fit of engineering can even uncover secret truths regarding mutual wisdom in nature.

The researchers also simulated a simple search mission with a red light inside the tank. Using the dispersion algorithm, the Bluebots spread across the tank until one comes close enough to the light source to detect it. Once the robot detects the light, its LEDs begin to flash, which triggers the aggregation algorithm in the rest of the school. From there, all the Bluebots are clustered around the signaling robot.

“Our results with Blueswarm represent a significant milestone in the investigation of underwater self-organized collective behaviors,” said Nagpal. “Insights from this research will help us develop future miniature underwater swarms that can perform environmental monitoring and search in visually-rich but fragile environments like coral reefs. This research also paves a way to better understand fish schools, by synthetically recreating their behavior.”

Another Week of Job Slashes and Crypto Crashes