Researchers from the University of Michigan created a self-erasing microchip that could help stop counterfeit electronics and alert users if a package has been tampered with. A team of academics from this University has developed self-powered and self-erasing chips that they hope could be used as an anti-counterfeit or tamper-detection system. The team used new material that temporarily emits energy, changes when exposed to light and self erases in days, or is instantly erased with a flash of blue light.

The new chips have been built with the help of a new material that changes its color while it temporarily stores energy. It self-erases in a matter of days, or it can be erased on-demand with a flash of blue light. The material consists of a three-atom-thick layer of semiconductor laid on top of a film of azobenzene molecules. The semiconductor acts like graphene, but it goes one step further because it can emit light at a particular frequency to create a written message.

The semiconductor is known as “beyond graphene,” and has a special property that it can emit light when its molecules vibrate at certain frequencies. With a self-erasing bar code printed on the chip inside the device, the owner could get a hint if someone had opened it to secretly install a listening device. Or a bar code could be written and placed on integrated circuit chips or circuit boards, for instance, to prove that they hadn’t been opened or replaced on their journeys. When the two are combined, the azobenzene molecules pull on the “beyond graphene” semiconductor, causing it to vibrate in its special frequency range and emit light. Likewise, if the lifespan of the bar codes was extended, they could be written into devices as hardware analogs of software authorization keys.

The self-erasing chips are built from a three-atom-thick layer of semiconductor laid atop a thin film of molecules based on azobenzenes — a kind of molecule that shrinks in reaction to UV light. Those molecules tug on the semiconductor in turn, causing it to emit slightly longer wavelengths of light. This reaction effectively allows academics to “write” visible messages on the chip itself. 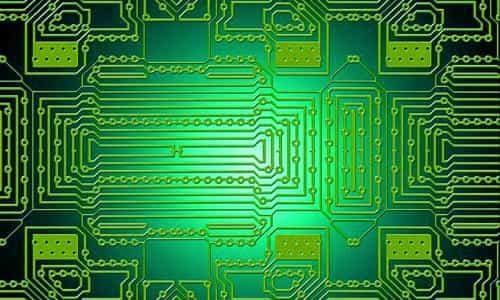 Che-Hsuan Cheng, a doctoral student in material science and engineering in Deotare’s group and the first author on the study in Advanced Optical Materials, is most interested in its application as self-erasing invisible ink for sending secret messages. This makes this new material ideal for creating anti-counterfeit seals that can be applied to products to verify their authenticity or as tamper-detection systems that can be installed inside sensitive systems.

Whatever was written on the chip, be it an authentication bar code or a secret message, would disappear when the azobenzene stopped stretching the semiconductor. Alternatively, it can be erased all at once with a flash of blue light. Once erased, the chip can record a new message or bar code. For example, a barcode or QR code can be printed on chips installed inside commercial products or security systems. If the barcode is missing at an audit, the inspector can determine that a hardware product is a fake or that a secure system’s casing has been opened and the product was most likely tampered with.

The semiconductor itself is a “beyond graphene” material, said Deotare, as it has many similarities with the Nobel Prize-winning nanomaterial. But it can also do something graphene can’t: It emits light in particular frequencies.

Then, the chip went to Deotare’s lab to be layered with the semiconductor. Using the “Scotch tape” method, Cheng essentially put sticky tape on a chunk of the semiconductor, tungsten diselenide, and used it to draw off single layers of the material: a sandwich of a single layer of tungsten atoms between two layers of selenium atoms. He used a kind of stamp to transfer the semiconductor onto the azobenzene-coated chip.

The next steps for the research include extending the amount of time that the material can keep the message intact for use as an anti-counterfeit measure.

The research is funded by the Air Force Office of Scientific Research. Kim is also a professor of chemical engineering, biomedical engineering, macromolecular science and engineering, and chemistry. Currently, this material’s only downside is that it can only store messages of up to seven days before the semiconductor and the azobenzene molecules stop interacting with each other and the chip self-clears.

The next step for the University of Michigan team is to extend the material’s lifetime beyond the current week to something in the range of months to years, where it could reliably stand to be incorporated into commercial systems.