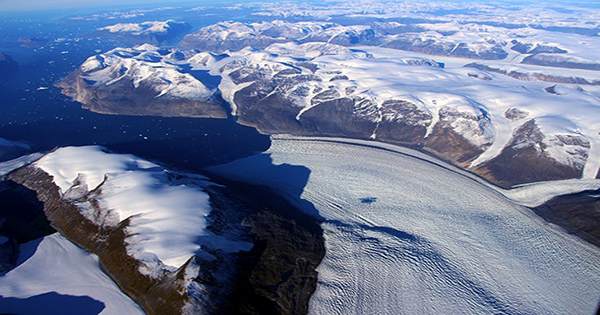 Everyone is in for some bad news: the Earth is losing ice at a rate that can only be defined as “staggering” and “truly the worst situation we could envision” due to global warming. According to a recent study, the repercussions of this mega-melt aren’t just mercury-laced water or the sudden disappearance of Florida — the melting of our planet’s polar ice caps is actually bending the Earth’s crust. “Imagine a wooden board floating on top of a tub of water,” said Sophie Coulson, lead author of the work, which was published in Geophysical Research Letters last month.

“When you push the board down, the water beneath it will move down. You can see the water going vertically to fill that gap if you lift it up.” This is the “rebounding” effect, which explains why sea levels are currently falling in locations like Canada and Scotland. If the board-in-a-bathtub analogy doesn’t work for you, imagine yourself sitting on a couch, with the Earth as the seat and your butt as a massive ice sheet (sorry, we don’t create the science rules.)

When you sit down, the cushion depresses under you but bunches up all around you; yet, when you rise up, your butt impression springs back up (or “rebounds”) and the surrounding cushion flattens out again. The same may be said for the Earth’s crust: as the Laurentide Ice Sheet melted into the sea, Canada and Alaska were no longer weighted down by the ice, and the southern United States was no longer pushed up as a result. As a result, the land around Hudson Bay in Canada is rising by nearly half an inch per year and Washington, D.C. is expected to be mostly underwater by 2200.

Coulson added, “Scientists have done a lot of work directly beneath ice sheets and glaciers.” “They understood it would define the region where the glaciers are, but they didn’t think it was on a global scale,” says the author. In fact, the melting ice is forcing the Earth to bend “even in areas more than 1,000 kilometers from the ice loss,” according to an accompanying piece in Nature. What scientists investigating the rebounding phenomena hadn’t anticipated – and what Coulson’s team discovered – was that the crust was moving more horizontally than vertically in some spots.

“The rebounding of the crust, for example, is changing the slope of the bedrock beneath the ice sheet in some places of Antarctica, which might affect ice dynamics,” added Coulson. “We think of the Earth as an elastic structure, like a rubber band, on short timescales, but it behaves more like a very slow-moving fluid over thousands of years […] because ice age processes take such a long time to complete, we can still witness the results of them today.”