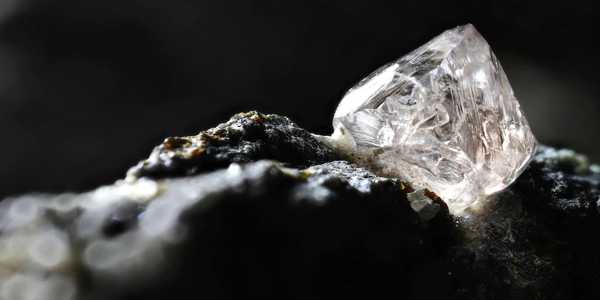 Curtin University researchers have developed a model that explains the formation and location of all three major types of diamonds, which could influence how gems are mined. According to new Curtin research, the Earth’s deepest diamonds are commonly made up of former living organisms that have effectively been recycled more than 400 kilometers below the surface.

A mined, natural diamond is a crystallized carbon structure formed beneath the earth’s surface over millions (or sometimes billions) of years under ideal heat and pressure conditions. Diamonds are brought to the surface by natural events (such as volcanic eruptions) and are then mined from the ground.

The study, published in Nature’s Scientific Reports, discovered that both diamonds found in oceanic rocks and super-deep continental diamonds shared a common origin of recycled organic carbon deep within the Earth’s mantle. Dr. Luc Doucet of Curtin’s Earth Dynamics Research Group in the School of Earth and Planetary Sciences, the study’s lead author, said the findings provided a fascinating insight into the world’s most expensive gemstones.

The Earth’s deepest diamonds are commonly made up of former living organisms that have effectively been recycled more than 400 kilometers below the surface, new Curtin research has discovered.

“This research discovered that the Earth’s engine actually turns organic carbon into diamonds many hundreds of kilometers below the surface, giving new meaning to the old trash to treasure adage,” Dr. Doucet said.

“Ballooning rocks from the Earth’s deeper mantle, known as mantle plumes, then transport diamonds back to the Earth’s surface via volcanic eruptions for humans to enjoy as valuable gemstones.”

“While recycling is quickly becoming a modern-day necessity for our long-term survival, we were surprised to learn from this research that Mother Nature has been showing us how to recycle with style for billions of years.”

Oceanic, super-deep continental, and lithospheric diamonds are the three main types of natural diamonds, formed at different levels of the mantle with a varying mixture of organic and inorganic carbon.

Distinguished co-author John Curtin, the research, according to Professor Zheng-Xiang Li, Head of the Earth Dynamics Research Group, provided a model that explains the formation and location of all three major types of diamonds.

Natural diamonds formed three billion years ago deep in the earth under extreme pressure and high temperature. Volcanic activity brought them to the surface, where they sat in kimberlite pipes, a type of volcanic rock formation, waiting to be mined. Only about 5% of kimberlite pipes contain enough diamond to make mining economically viable.

Professor Li stated, “This is the first time that all three major types of diamonds have been linked to mantle plumes, ballooning hot rocks driven by plate tectonics, and the supercontinent cycle from deeper Earth.”

“This research not only contributes to a better understanding of the Earth’s carbon cycle, but it also has the potential to reveal more secrets about the Earth’s dynamic history by tracking the past locations of mantle plumes and superplumes. This can be accomplished by mapping the distribution of diamonds on both the continental and oceanic scales.”

Professor Li, on the other hand, said it was still a mystery why diamonds formed in the so-called “mantle transition zone,” 400 to 600 kilometers deep, used only recycled organic carbon. “This could be related to the physical-chemical environment there,” Professor Li speculated. “It is not uncommon for a new scientific discovery to raise additional questions that need to be investigated further.”

Coal is commonly associated with diamond formation, which is a common misconception. Because coal is also made of carbon, it’s easy to see why there’s confusion. However, it also contains a variety of other substances, classifying it as a sedimentary rock. Coal is formed by plant debris, fungi, and even bacteria. Coal cannot become a rough diamond due to impurities alone. It is also rarely buried to depths greater than two miles, making it extremely unlikely that it was moved from the crust to such a great depth. Instead, carbon trapped in the earth’s interior is most likely the carbon source for diamonds.