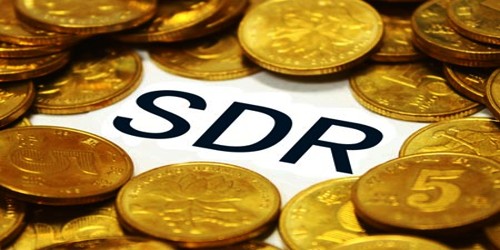 To help to increase the international reserves the IMF created the Special Drawing Rights (SDRs) in 1969. The SDS is an international reserve asset created to supplement member’s existing reserve assets. The IMF uses SDRs for internal accounting purposes. SDRs are allocated by the IMF to its member countries and are backed by the full faith and credit of the member countries’ governments.

SDRs serve as the IMF’s unit of account and are used for IMF transactions and operation by unit of account we mean the unit in which the IMF keeps its records. For example, we noted earlier that the total quota the IMF holds is SDR 213 billion, which at current exchange rates, was about S 327 billion. The value of the SDR is based on the weighted average of five currencies. On January 1, 1981 the IMF began to use a simplified basket of five currencies for determining, valuation. At the end of 2004 the U.S dollar made up 39 percent of the value of the SDR the euro, 36 percent, the Japanese Yen 13 percent, and the British pound, 12 percent. These weights were chosen because they broadly reflected the importance of each particular currency in international trade and payment.

Although the SDR was intended to serve as a substitute for gold, it has not taken over the role of gold or the dollar as a primary reserve asset. Therefore, the international community decided to create a new international reserve asset under the auspices of the IMF.

Export Procedures in a Country

Advantages of a business letter

Services Offered by Manufacturers to the Retailers