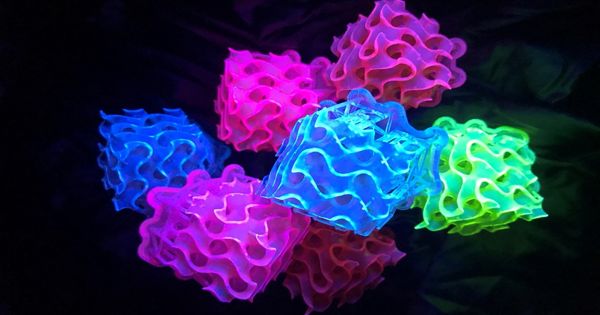 Researchers report that by incorporating positively charged fluorescent dyes into a new class of materials known as small-molecule ionic isolation lattices (SMILES), a compound’s brilliant glow can be seamlessly transferred to a solid, crystalline state. The breakthrough removes a long-standing barrier to the development of fluorescent solids, resulting in the brightest known materials in existence.

If you’ve ever been to a neon rave, you’ll understand the novelty that comes with fluorescence; from body paint to lighting, it arouses the moth within all of us that simply wants to gaze at bright lights. If this describes you, I have good news: chemists have just created the brightest fluorescence ever, and the results are stunning. The study, published in the journal Chem, employs a new class of materials to enhance dye properties, resulting in the brightest known fluorescent materials in existence.

Existing fluorescent dyes have always been limited in their brightness because they do not mix well when transformed into solid optical materials. When dyes enter a solid state, they undergo a process known as “quenching,” which affects how they behave when smushed together and results in a decrease in fluorescence intensity.

Chemists Creates Brightest Ever Fluorescent Light and it’s Dazzling. The research, published in the journal Chem, uses a new class of materials to boost the properties of dye, creating the brightest known fluorescent materials in existence.

To overcome this “subdued glow” effect, the researchers combined a colored dye with cyanostar, a star-shaped macrocycle molecule that prevents the “quenching” effect that occurs when dyes are transformed into a solid. The cyanostar prevents the quenching effect by forming a lattice-like structure that separates the dyes.

“When the dyes stand shoulder-to-shoulder inside solids, the problem of quenching and inter-dye coupling emerges,” said Amar Flood, a chemist at Indiana University and co-senior author on the study, in a statement. “They are unable to avoid ‘touching’ each other. They act like young children at story time, interfering with each other and ceasing to be individuals.”

“These materials have potential applications in any technology that requires bright fluorescence or requires designing optical properties, such as solar energy harvesting, bioimaging, and lasers,” says Amar Flood, an Indiana University chemist and co-senior author on the study with Bo Laursen of the University of Copenhagen.

As the clear cyanostar and dye mixture solidified, a new class of materials known as small-molecule ionic isolation lattices, or SMILES, formed in the mixture. Previous research attempted to keep the dyes apart using these divider macrocycles, but these macrocycles also had their own color, which dulled the effect. Flood’s team realized that the key to revealing the dye’s true fluorescent potential was the presence of colorless macrocycles.

“Some people think that colorless macrocycles are unappealing, but they allowed the isolation lattice to fully express the bright fluorescence of the dyes without being hampered by the colors of the macrocycles,” Flood explained. “These materials have the potential to be used in any technology that requires bright fluorescence or requires the design of optical properties, such as solar energy harvesting, bioimaging, and lasers.”

Because of how they behave when packed close together, dyes tend to ‘quench’ when they enter a solid state, decreasing the intensity of their fluorescence to produce a more subdued glow. ‘When dyes stand shoulder-to-shoulder inside solids, the problem of quenching and inter-dye coupling emerges,’ says Flood.

“Because these materials are brand new, we don’t know which of their inherent properties will provide superior functionality.” We also don’t know what the limits of the materials are. As a result, we will develop a fundamental understanding of how they work, resulting in a robust set of design rules for creating new properties.”

According to Flood and Laursen, this will not be a quick fix, but it could have significant implications for existing fluorescent technologies. SMILES is expected to benefit the fields of solar technology, medical diagnostics, lasers, and drug development.