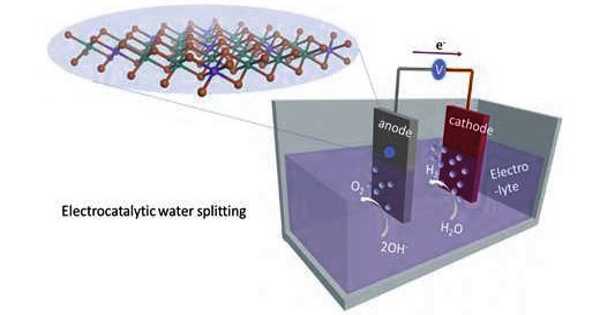 Hydrogen production refers to a group of industrial methods for producing hydrogen gas. By 2020, the vast majority of hydrogen (95 percent) will be produced from fossil fuels via steam reforming of natural gas, partial oxidation of methane, and coal gasification. Other methods of producing hydrogen include biomass gasification, methane pyrolysis with no CO2 emissions, and water electrolysis. The latter processes, methane pyrolysis, and water electrolysis can be carried out directly using any source of electricity, including solar power.

Unfortunately, both half-reactions of water electrolysis—hydrogen and oxygen evolution—are slow and require a lot of power. Catalytically effective electrodes, particularly those based on precious metals, have the potential to accelerate electrochemical processes and improve energy efficiency. However, their widespread use is hampered by high costs, scarcity, and instability. Alternatives based on abundant, low-cost metals rarely work satisfactorily for both halves of the reaction.

A team led by Shuyan Gao (Henan Normal University, China) and Xiong Wen (David) Lou (Nanyang Technological University, Singapore) has created a novel, low-cost multifunctional electrode material based on cobalt (Co) and nickel (Ni) for efficient electrocatalytic hydrogen production. Nanospheres of cobalt–nickel–glycerate are subjected to combined hydrothermal sulfidation and gas-phase phosphorization to create the material. This results in objects known as yolk-shell nanoparticles, which are made of phosphorus-doped cobalt–nickel–sulfide (P-CoNi2S4). These are tiny spheres with a compact core and a porous shell with a space in between—much like an egg whose yolk is surrounded by the egg white and so does not touch the shell.

Phosphorus doping increases the proportion of Ni3+ in the hollow particles relative to Ni2+, allowing for faster charge transfer and thus faster electrocatalytic reactions. The material can be used as an anode or a cathode and has a high activity and stability in the production of hydrogen and oxygen during water electrolysis.

Hybrid electrolysis concepts are also being investigated in order to reduce the overall voltage of the electrolysis cell. Instead of being coupled to the production of oxygen, for example, hydrogen production could be coupled to the oxidation of urea, which requires significantly less energy. Waste streams from industrial syntheses, as well as sanitary sewage, could be sources of urea. For this half reaction, the new nanoparticles are also very useful.

Both water and urea electrolysis require a relatively low cell voltage (1.544 V or 1.402 V at 10 mA cm–2 over 100 hours, respectively). As a result, the new bimetallic yolk-shell particles outperform the majority of known nickel–sulfide- and even precious-metal-based electrocatalysts. They present a promising method for producing electrochemical hydrogen as well as treating urea-containing wastewater.

Enapter uses anion exchange membrane (AEM) electrolysis, which is a newer variant. This method, like alkaline electrolysis, allows negatively charged ions (OH-) to pass through the membrane. AEM eliminates the need for the expensive precious metals used as catalysts in PEM electrolysis. The process is also efficient at smaller scales, making it appropriate for decentralized applications.

A slightly different concept is used in high-temperature electrolysis. Ceramic membranes that conduct ions at extremely high temperatures separate super-heated steam into oxygen and hydrogen at temperatures ranging from 600 to 800 degrees Celsius. Because heat already provides, the majority of the energy required for this process, the electrical energy requirement is reduced. This method can be very efficient when industrial waste heat is used, which costs little or nothing. When measured in terms of electrical input, its efficiency is greater than that of other methods.

Latest Progress in Lithium-ion Batteries may make them Ubiquitous