Home Other Statue of Liberty 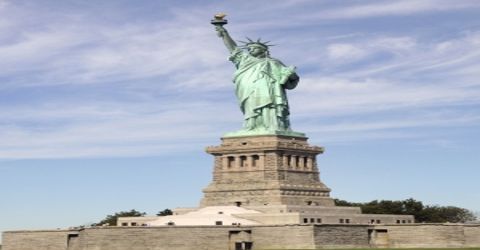 Statue of Liberty, one of the largest statues in the world, is situated on the Liberty Island. Its height is 306 ft 8 inch. It is a woman figure wearing robes and a spiked crown. The statue carries a torch in its right hand and a book in its left. On the book the date of independence and year of completing the 100th anniversary is inscribed. Broken chains lying on the feet of the statue indicate the end of tyranny. It possible patriot should visit and feel the statue. 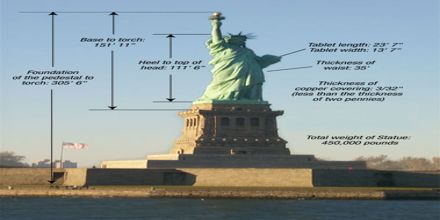 The Statue of Liberty was given by France to the United States to commemorate the centennial of US Independence in 1876. It was designed by the French sculptor Frederic Bartholdi. It symbolizes liberty in the form of a woman wearing flowing robes and a spike crown. The seven spikes on the crown represent the seven oceans and the seven continents of the world, indicating the universal concept of liberty. Broken chains lying at her feet symbolize the overthrow of tyranny. The statue has also become a global symbol of freedom, marking the arrival of millions-of immigrants to the USA. The cost of the statue was funded by contributions from both the French and the Americans. In 1885, a New York newspaper entitled “World” announced that $102,000 had been raised from donors, and that 80 per cent of this total had been received in sums of less than one dollar.

The Statue of Liberty is situated on the Liberty Island in the harbour of New York. The statue symbolizes liberty. It is the figure of a woman wearing flowing robes and a spiked crown and holding aloft a torch in her right hand and a book in her left. The book in the hand of the statue stands for knowledge. The statue was designed by a French sculptor and was given by France to the United States as a token of friendship to commemorate the centennial of US freedom in 1876. Formed of copper sheet, the Statue of Liberty is framed in an iron structure. 300 different types of hammers were used to create the copper structure.