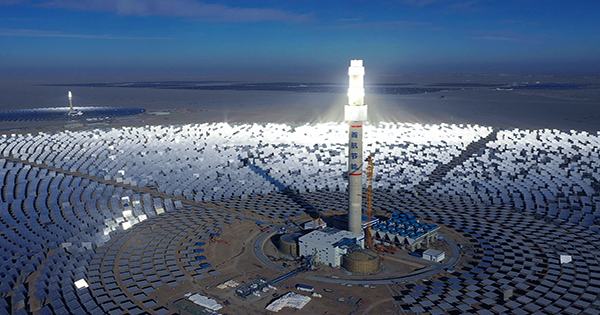 We must make extensive use of renewable energy for a carbon-free future to prevent climate change. Over the last four decades, it has become much cheaper but we still have small problems that prevent it from becoming an exclusive source of energy in our lives. A fork is its reliability.

The technology is amazing but it depends on the sun and wind, so researchers are focusing on ways to store the energy produced and supply it to consumers according to demand. A team of engineers from MIT has come up with a new conceptual design to do just that.

As reported by Energy and Environmental Science, they plan to use the extra electricity generated to heat the white-molten silicon. The light emitted by the molten metal can then be converted back to electricity when needed.

This “sun in a box” approach is expected to be cheaper than current solutions. The team estimates that it will cost about half as much as hydropower storage, currently the smallest form of grid-scale energy storage. And it is much cheaper than lithium-ion batteries.

Senior author Professor Asegun Henry said in a statement, “If we wanted to run the grid on renewables now, we couldn’t because you would need fossil fuel turbines to make sure that renewable supplies could not be shipped on demand.” “We are developing a new technology that, if successful, will address the most important and critical issues of energy and climate change, such as storage issues.”

If this setup was possible the team had to come up with fancy designs for testing. They built a small graphite-lined tank that could withstand the heat of molten silicone without any kind of leakage on the outside. They also built a pump capable of withstanding such high temperatures, the highest tolerance ever recorded in the Guinness Book of World Records.

The project is called TEGS-MPV, which stands for Thermal Energy Grid Storage-Multi-Junction Photovoltaics. It will have two large tanks, one for “cool” molten silicon (1,920 ° C; 3,500 ° F) and one for “hot” molten silicon (2,370 ° C; 4,300 ° F). When electricity is needed, the hot silicone is pumped into tubes that can emit light, and special multi-junction Photovoltaics can efficiently convert it into electricity.

Despite the technological success and challenges, engineers are working hard on this project because it has the potential to change energy storage and can be built literally anywhere without the need for erosion and expensive dams that require a hydroelectric system. The team believes that a single TEGS-MPV can be used in a city where 100,000 homes are powered exclusively by renewable energy.

Want to Learn How to Make Apps for iPhones, iPads, And More This Training Can Get You There

Looking To Join the Metaverse Movement Here’s How