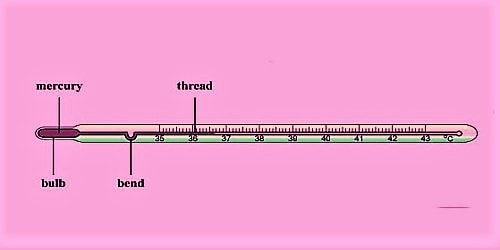 Thermometers consist of three basic elements: spirit-filled liquid, which response to changes in heat and cold; a glass tube to house the temperature-measuring liquid; and black ink to color in the engraved scale marks with readable numbers. For measuring temperature a sensitive thermometer is needed. Usually, this thermometer is scaled by line-marks ranging from 94 to 108 degree Fahrenheit.

Firstly, a dry and clean capillary glass tube of fine and uniform bore is taken. One end of it is connected to a cylindrical bulb B and the other end is closed. Now the tube is kept vertically straight by a stand and a funnel F is connected by a rubber tube to the open end of the capillary tube.

Taking some pure and clean mercury in the funnel the capillary tube is filled with mercury by successive heating the cooling the bulb. The volume of air inside the bulb and the tube expands due to heat and some air comes out through the mercury as bubbles. During cooling the volume of the rest air inside the bulb and the tube decreases, so some mercury enters inside the tube due to outside pressure. In this way, the bulb and the tube become filled with mercury. Then the bulb is heated so that mercury inside the bulb and the tube starts boiling and ejected vapor removes air from the tube. In this condition, the tube is sealed by a sharp and pointed flame. When the bulb is cooled to room temperature, the bulb and a part of the capillary tube become filled with mercury and the rest of the capillary tube remains empty. When the mercury returns to the normal state, two marks are made on the tube corresponding to the temperatures of the two fixed points. In mercury thermometer, the lower fixed point is marked corresponding to the melting point of ice and the upper fixed point is marked corresponding to the boiling point of water. The difference in temperature between these two fixed points is called the fundamental interval. Depending on the temperature scale, the fundamental interval is equally divided into some divisions and each division is called degree.

A thermometer consists of a glass bulb filled with mercury. A capillary tube arises from this bulb. Due to the thin bore of the tube, a little change in the volume of the mercury becomes considerably noticeable. According to the construction, there are dissimilar types of thermometers. These are used for various purposes. Some of the types are discussed below:

What do you mean by Sensitivity of a Thermometer?

How many kinds of fixed points in thermometer scale?