Home Physics What is Interference? 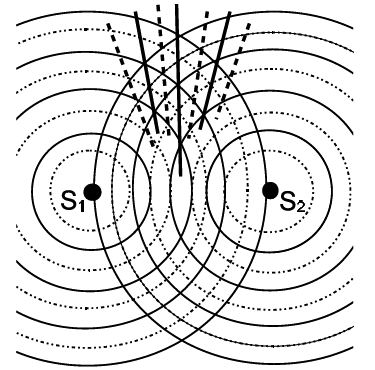 In physics, when two sets of waves of the same frequency and same or nearly equal amplitude travelling through the same medium overlap, then it is found that due to superposition, they wholly or partly multiply each other at certain times and places and reinforce each other to produce a greater effect at other time and places. This phenomenon is called interference.

Interference is a characteristic feature for all waves, independent of the nature of the wave, and explains several wave phenomena: (1) standing waves that are relevant for waves along a string and the sound waves and (2) diffraction.

We assume that two coherent sources S1 and S2 (indicated by the two dots) produce waves in the same region. Coherent means that successive crests [solid] and troughs [dotted] of the two sources are produced at the same time. The addition of two waves follows the superposition principle. When two or more waves are present simultaneously at the same location, the resultant disturbance is the sum of the disturbances from the individual waves; that is, we add the amplitudes and not the intensities from different sources. 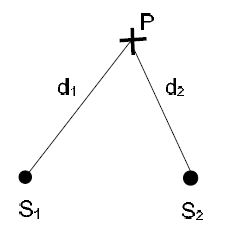 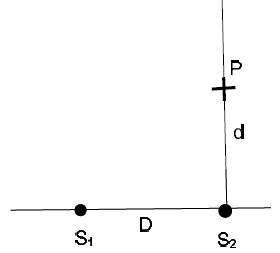 Example: Two speakers vibrate in phase and produce the sound with frequency f = 440 Hz [musical tone “Al. The speakers are separated by the distance D = 23 cm. Find the shortest perpendicular distance from the speaker S2, where the sound from the two speakers cancels. What is the distance to the next maximum?

We set n = 1 and find the distance to the first maximum: