First law: The incident ray, reflected ray and the normal at the point of incidence on the reflector lie in the same plane.

Second law: The angle of incidence is equal to the angle of reflection. 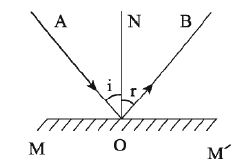 Diffused reflection: If a parallel beam of light is incident on a surface and after reflection it is neither parallel nor converted into a convergent or a divergent beam, then such reflection is called diffused or irregular reflection.

Figure (2) shows that a parallel beam of light incidents on a rough surface. In this case, the rays incident at different angles at different point of incidence on the rough surface, as a. result the corresponding angle of reflection of these rays become different. Due to this, the reflected rays are no more parallel. Objects which we see around us, most of their surfaces are not smooth. As a result, the reflected rays which enter to our eyes are diffused in nature. Due to this, the objects appear dim instead of bright. Most of the surfaces which appear smooth to naked eyes actually are not smooth. When these objects are viewed with a microscope then they appear rough.

State the characteristics of wave motion